About goldfish emergency and the owner author administrator

About goldfish emergency. Would you like to know a little about me? I started keeping goldfish when my daughter stopped at the age of eleven. She’d been given two tiny fish for Christmas, and she had no interest. Someone gave me a quart sized antique fish bowl for the fish, and that’s what started my goldfish journey almost twenty years ago

Being on well water, the fish survived their daily water changes, and quickly outgrew their bowl. The next bowl held two gallons. The opening was really small, but the bowl was beautifully shaped. Soon after I moved to town, one of the fish died. The other began swimming into the glass, trying to get to her reflection. I raced to the pet shop, and came home with one tiny fantail fish, the only white fish swimming in a school of feeder comets. He was adorable, and it was love at first sight for both fish

The pair lived for thirteen years. The first fish died from female issues, and her fellow died of a broken heart soon after

During those first few years, my obsession began when I found the fantail laying upside down at the bottom of the tank. I gave him a salt bath, something I remembered reading. It worked. Within a few moments the fish was moving its fins and working its gills. He was alive

I had been through several goldfish articles and websites, and although some of the information I found was helpful, none of the advice given was keeping my fish healthy. While the original pair seemed to survive my feeble attempts at goldfish keeping, one new fish after another died

I upgraded from a two gallon bowl to a thirty gallon hexagon shaped tank, and then to an eighty five gallon stock tank. After finding my fantail like that, I was determined to keep my fish alive and healthy, so I began researching the goldfish’s native origin, the rivers of China. My thought was, if I could recreate the water conditions and quality, my fish would thrive just as their ancestors did, and it worked

Here’s a photo of my first stock tank. As you can see, I worked harder at making it attractive than making a healthy environment. Today, my tank has no plants other than algae, and no decorations. Just a terracotta drain tile for the fish to hide in and four pond pumps. View the video of my ecosystem 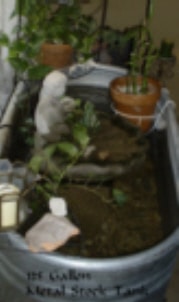 It’s all about the water our fish live in

The Gibel carp thrives in water rich in minerals, cold and heavily oxygenated, and so do our goldfish. The Gibel carp swims in water that is fast moving, with strong currents. I knew what I had to do. Get that water moving, and expose the surface to fresh air. I buffered the mineral value and shot for the high end of the comfort zone with the parameter’s measurements. Good enough wasn’t good enough. I wanted great water for my fish

About owner and administrator

This is where it started, with the water, but it didn’t stop there. I became obsessed with minerals and salts, and just how powerful they were. The can give life back to a dying fish, and they can kill unwanted organisms without harming the good. Their healing properties were endless. Then I began experimenting with various herbs, liquid chlorophyll, and finally, last, but not least, H202. I’ve been into the world of herbs and natural remedies all my life, and it was only natural I would start experimenting and developing natural remedies for goldfish for healing and enhancing the health of not just the fish, but the environment they live in 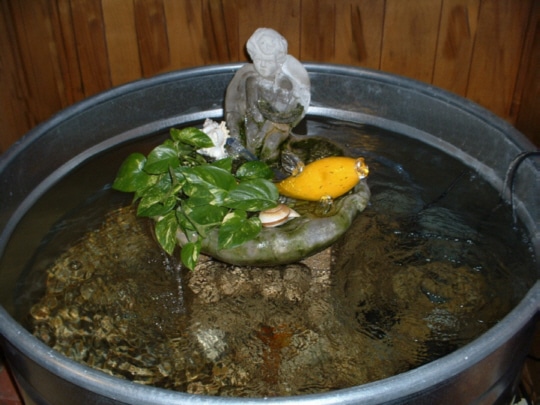 My goldfish thrive in the natural environment I’ve created for them, but even so, I use the herbs and salts to keep them healthy. The smaller the body of water, the more challenges involved in keeping it free of bad bacteria. This is especially true with indoor fish houses. Mother Nature needs a special invitation to come in

At first I began listing the remedies, and sharing them as treatments, but too many people were having problems finding the ingredients, getting the strength and potency right. They asked if I could bottle them; hence, the organic goldfish. My favorite remedies and water treatments I use regularly are the ones you see listed in The Organic Fish store

My passion for goldfish is so strong, I’ve made it my career. I am here all day every day, ready to help with a goldfish emergency, ready to bottle a remedy, to take a hotline call or to sell a book. This is my first priority, not a hobby, not a little something I do. I am devoted

Do I have a few other interests? Yes, I’ve rescued a lot of cats and a few dogs over the years, enough to write a book about it, and this page has supported the cause Rand Rescue

I’ve been designing homes and small commercial projects for close to forty years, and I’m semi retired from it now, but hope there are a few more homes to design in my future. I’m an artist, and I let it show in my work Unique House Plans