Nitrates in tap water; it’s uncommon, but it happens. In some cases high levels of nitrates pollute what should be fresh and healthy drinking water. When this happens, filters can make our water safe to drink, or we can buy bottled water, but what about our goldfish? Filters remove the toxins, but they also remove the value from water; the minerals goldfish need

Most bottled water has been filtered, or stripped of its value, known as reverse osmosis, this water will not support life, and is next to impossible to keep buffered, a constant battle, placing the fish at risk.

Ammonia and nitrite in tap water

Where waste is found, ammonia forms, and where ammonia forms, beneficial bacteria form to feed on it, converting it to nitrite. Ammonia and nitrite are easily converted by the use of water treatment, because they are typically found in insignificant amounts when present in tap water, but nitrates can rise to dangerous levels, and water treatment can only safely convert 5 ppm of the toxin

Algae feeds on nitrates, lowering levels. Other plants also feed on the toxin, but cannot complete with algae appetite. We can use this to our advantage when nitrates are present in our tap water by encouraging the formation of the vegetation in our goldfish house, but we can also create a freshwater container that contains reduced nitrate levels by encouraging the formation of algae

Some goldfish keepers see algae as nuisance, or even think of it as scum, something that needs to be eliminated, not realizing it’s value. Algae not only feeds on nitrates, keeping levels low in a cycled tank or pond, but it’s also a valuable food source for our goldfish

The size of the freshwater container should match or come close to matching the size of your goldfish house. It takes time for algae to feed on nitrates, and reduce the toxin to safe levels. Most of us exchange a good 20 to 30% of our tank or pond water each week, and it may take a week or two for the algae to do its job

Our rivers and lakes are filled with plant life, including algae and moss. Nitrates are consumed as they’re being produced. It’s unnatural for our fish to have to tolerate nitrates, as in the wild, they would be living in water free of the toxin

This freshwater container will need it’s own pond pump in order to keep the water oxygenated and free of bad bacteria. It will also need a light source. The brighter the light, the faster the algae will form. Algae prefers the same temperatures as goldfish. If the water is too cold, the algae growth may slow, and if the water’s too warm, the algae might die. Temperatures comfortable for goldfish will keep algae thriving. The larger your fish house, the larger the freshwater container will need to be

The algae on the walls of this cement pond help to create a safe and healthy environment for the goldfish that live in it. No cycled goldfish house is complete without it, the icing on the cake to the nitrogen cycle 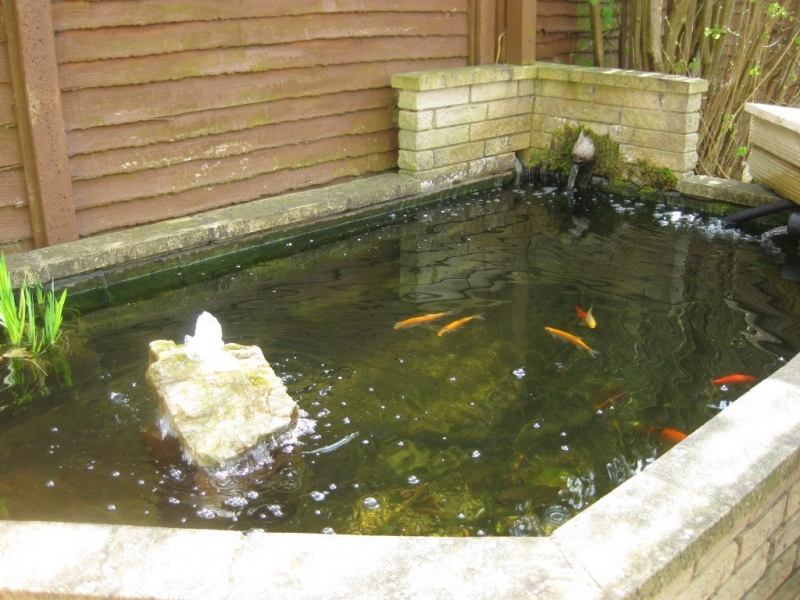 Chlorine retards the formation of algae. If you have chlorine in your freshwater source, there’s no need to use water treatment. Chlorine is a liquid gas that will be eliminated from the water as it’s exposed to fresh air by water movement 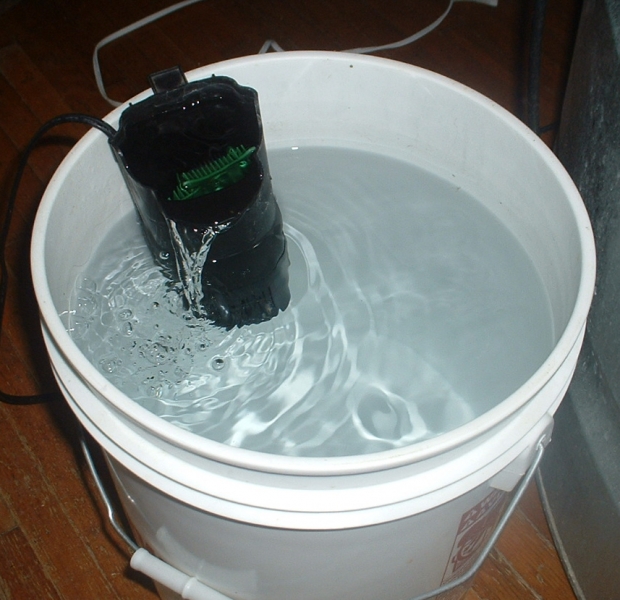 It will take a few months for a lush layer of algae to build up in the freshwater container, but once it becomes established, you’ll have freshwater that is lower in nitrates that can be safely converted by water treatment, keeping your fish safe from the gentle giant. The container should be able to hold twice as much water as you use in one water change. If you exchange 10 gallons of tank water per week, you’ll need a twenty gallon container

Another method of removing nitrates from tap was is with the use of lava rock. No other product or material is as absorbent, and holds as well. A low flow of tap water trickling over a stack of lava rocks in a canister into a fresh water bucket can reduce nitrates to safe levels, and the lava rock can be cleaned by boiling in salt water; ready to go again

If you’re lucky enough to own your own home, consider catching rain water to use for your fish and your family. Test a sample of rain water first, and you will more than likely find it free of nitrates, research the possibilities