Power Outage can happen to you

Power outage will happen to you sooner or later, so be prepared for a pump or a filter to stop running. Without our pumps and filters, we would be unsuccessful at keeping goldfish in tanks and aquariums. What happens if a pump slows or stops? This is a good reason for having more than one pump in your tank; having a back up in essential, but what if there is a power outage? Battery operated aerators and pumps, or power converters can be purchased; extra batteries kept on hand. Some of these can be plugged into the lighter of your vehicle to generate power, or connected to your vehicles battery. Generators are pricey, and must be kept outdoors, however, can save the day

Carbon dioxide is created from waste, which goldfish make lots of. This harmful gas takes up space in a body of water, keeping oxygen from entering. In order for your tank or pond to be oxygenated these gases must be removed from the water. In an aquarium, the body of water is small compared to the surface area. Increased water movement is necessary to eliminate carbon dioxide. Only a real pond pump provides the right kind of action, however, in a power outage, we must manually remove gases

Moving water has many benefits. The moving water eliminates green water algae, forcing it to become substrate algae. Moving water breaks up supersaturated gases and expels carbon dioxide, and last but not least, moving water oxygenates and cools the water

The larger the fish house, the longer the water will remain oxygenated

When it does happen, and you find yourself with no battery operated equipment, or can’t obtain it, move the water manually

Push a pitcher deep into the water filling it. Bring it up, and pour it back in. Repeat this action 5 times per five gallons of water three to four times daily for standard stocking level

Goldfish are cold blooded; meaning their body temperatures are the same as their environment. Goldfish consume less oxygen in colder temperatures because they become dormant. This is a positive attribute during a winter power outage and a summer outage as well; as long as there is plenty of ice on hand

Withholding food can upset your fish’s delicate digestive system, and starve the friendly bacteria. Feed less as temperatures drop. Feed only what the fish will eat in five minutes. In colder temperatures they will become slower; feeding less and less. Stop feeding when and if the temperature drops below 54 degrees Fahrenheit. When goldfish become dormant, so do the beneficial bacteria

Toxins are more dangerous to goldfish in warmer water temperatures. Test daily for ammonia and nitrite in a cycled or cycle free tank. Continue testing for a few days after the outage

Decreased oxygen in the water leads to a drop in pH levels. Test both pH daily during power outage. Use Oop Boost if KH is healthy but pH is low. Use Water Boost if KH is low

Keep water oxygenated by clearing the body of water from carbon dioxide, a gas created from waste. Using a clean and free of contaminants pitcher, push deep into water pulling from bottom; hold high over water, and pour, allowing it to hit hard. Perform more frequently with warmer water; as much as 5 minutes every hour, or as often as possible; less frequently in colder water

Symptoms of oxygen deprivation redness around gills; gasping at the surface; bulging eye or pop eye

Oxygen is absorbed into the water from the air above the surface. Make sure your aquarium is open and exposed to fresh air. Tanks or ponds with less surface area will be more at risk for lowered oxygen levels in the water. The less surface space, the more water movement needed. Manually fan the top of the tank periodically to make sure the water is exposed to fresh air. Carbon dioxide hangs heavily in between the surface and the top of the tank, keeping oxygen from entering the water

Large tanks hold consistent temperatures and support oxygen for longer periods of time; smaller tanks may warm or freeze much faster and oxygen levels may drop

In winter: allow the temperature of your tank water to fall gradually; 50 to 55 degrees Fahrenheit is preferable, but make certain that it does not fall below 40 degrees. Even though goldfish and beneficial bacteria alike become dormant in the winter, they cannot tolerate freezing temperatures. If the temperature drops too low; burn a few candles around the tank to keep the tank water from freezing. If you have warm water available, use it to exchange some tank water

The aquarium in the photo below is set up more like a tropical fish house instead of a goldfish house. The lights are on and the top enclosed, leading to warm water that’s low in oxygen. In case of a power outage, these fish are in trouble 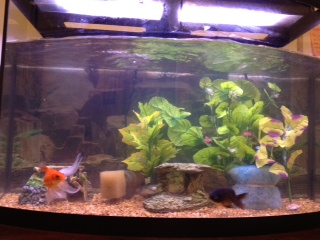 The fish in the photo below will fair much better in a power outage. The surface is exposed to fresh air, and the set up receives indirect lighting; the water cool 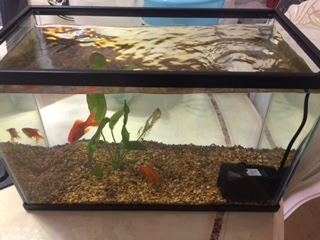 In summer: Place bags of ice around the tank, but do not float bags in the tank; which may cover the surface. Keep close watch on the temperature. Do not allow the water temperature to rise above 70 degrees; the colder the better; 55 to 60 degrees is preferable. Goldfish use less oxygen in colder water. Quiet water, with little surface area combined with warmer temperatures is a deadly combination

If your water is in pristine condition at room temperature; your goldfish can survive for several hours without the pumps depending on your stocking levels. If you come home from work, and the power has been off for the better part of the day; more than likely your fish will be fine. If the weather is extremely hot they might be affected depending on the stocking levels; another reason to keep stocking levels low. The less time spent under these conditions the better of course. If your water is in poor condition; then so are your fish, and it is likely they would not fare well under these same circumstances

After a power outage, test daily for ammonia and nitrite, as a spike cycle is possible if more than water than normal has been exchanged and feeding schedule has been altered

Treat your fish to the salt and garlic tonic combined, and continue testing for ammonia and nitrite for at least three or four days. It a spike hasn’t occurred by then it probably won’t

Be sure to work Supersaturated gases out of the water

To Catch a Goldfish