Goldfish stunted growth could be caused by genetics

Goldfish stunted growth could be inadvertently caused by being kept in a small container, however, in most cases we can blame it on genetics. How large or small we grow has a great deal to do with our parents and their parents and so on; true of all species. Most every litter of pups has a runt, but sometimes it goes farther than this having to do with bodily function

Growth hormone is produced by the pituitary gland. Some fish (and other animals too) may grow too large too quickly because of an over stimulated gland and some fish may not grow much at all. Tumors are the cause for the decreased production, but most commonly is caused by decreased growth hormone production. The normal growth rate for goldfish is 1” to 2” per year

Some stunted fish live long and healthy lives, however, some develop chronic health issues which often result in early death

Growth hormone is released during sleep. One of the reasons sleep is recommended for the sick or the injured is so our bodies can mend. This hormone is also responsible for repairing and rebuilding cells. To encourage additional rest, extend the lights out period to 12 or even 16 hours a day 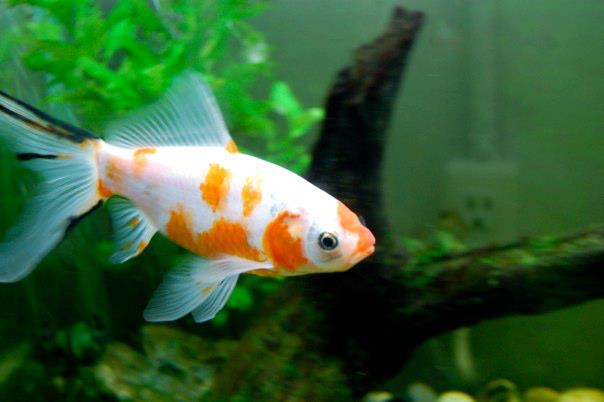 The gorgeous fish in the photo above is only two inches in body length, however, it’s over eight years old. Notice the fish has the body of a common, yet has double tail known to fancy fish. Will the small size shorten it’s lifespan? Time will tell

A vigorous workout also encourages the release of the growth hormone, but the experts have also learned that feeding carbohydrates after exercising encourages the production of insulin which counteracts the effects of growth hormone. Feed foods higher in protein when fish are most active