Lifespan Goldfish Koi may be longer than you think

Lifespan goldfish Koi has much to do with the health of its habitat. We’ve all heard many claims on the world’s oldest recorded living goldfish or Koi. Even though some of these claims sound outrageous, they may be a drop in the bucket to how long a goldfish or Koi could live if kept in the right environment. The oldest known goldfish kept in captivity was 44 years

There are many reasons a goldfish or Koi could die. Fish in the wild could be killed by a bigger fish, a bird, a raccoon, a cat, a dog or even a human. An indoor fish could be killed by one of our other pets, but as we all know, most goldfish and Koi in captivity die because of their keeper’s ignorance. As goldfish keepers, we’re responsible for maintaining a healthy ecosystem be it a pond or an aquarium, however, some fish will die without explanation. In most cases, poor water quality or improper feeding is to blame

Most of us have heard stories of the giant catfish or carp caught by noodling. Some of these fish are thought to be well over a hundred years old

How long do goldfish live?

The lifespan of the average goldfish sold by pet shops is 3 to 6 months. Most goldfish are purchased by inexperienced goldfish keepers that have no understanding of their needs. Even a more experienced Koi or goldfish keeper may be lucky to have a fish live ten to fifteen years. There are many things that can go wrong for a goldfish or Koi in captivity and in the wild, but if everything was to go just right, how long do you think your goldfish or Koi would live?

The fish in the photo below was said to be a goldfish, however, it looks more like a colorful carp 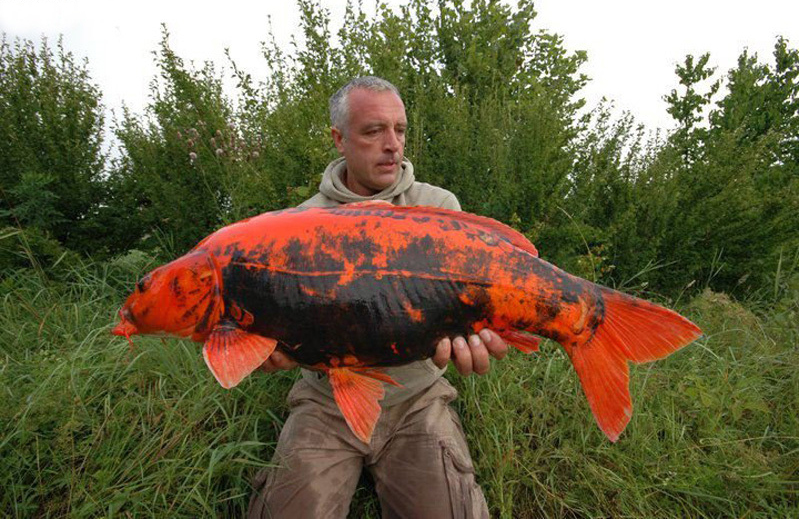 Koi and carp both can easily grow up to 3′ in length, averaging two to three inches of growth per year

If a goldfish or Koi was kept in a healthy ecosystem its life expectancy may be indefinite. It has been proven that many species of fish can live longer than a human