Natural Remedies for goldfish and Koi

Natural remedies goldfish and Koi, chlorophyll is known as the green blood of plants. Plant nutrition is synthesized from the basic elements in their environment and from photo synthesis. This is how green plants use sunlight to synthesize food from carbon dioxide and water; producing oxygen as a result. Photo synthesis is the most critical biochemical process on earth since most every living thing depends on it. Like humans and other living creatures, goldfish need chlorophyll to live; to grow and to maintain good health. Green blood is found in almost every plant, including algae

Promotes healing and is beneficial in treating ulcers; abscesses; open wounds; tumors; internal and external bacteria infection; enhances general health and boosts immune system. Increases oxygen levels in fish that have suffered from nitrite or nitrate poisoning. Chlorophyll may be administered orally by adding to gel food; or the fish may be given a green liquid bath; or the two combined doubling its effect

If you have no algae in your tank, and have no plans of growing it; consider adding chlorophyll to the diet as a safe and nutritious alternative

Nitrates are often confused with toxins similar to ammonia or nitrite, but this is not the case. The toxin is  similar to nitrites, but much more dangerous in high levels. High nitrate levels create dangerous water conditions by oxidizing the iron atoms in hemoglobin, and by reducing oxygen supply to the blood stream and tissue. This condition is called Methemo globinemia; closely related to the effects of DCS. Chlorophyll increases the oxygen levels in the red blood cells, lessening the affects of nitrate poisoning

Humans and goldfish alike share a common bond in their biological make up. They require similar nutrients, and like most creatures on earth, they all share a common need for chlorophyll, or what we call greens. Ever notice how outside cats enjoy chewing on grass; even dogs? It is a myth that dogs and cats only eat grass when they are sick; this is because they often vomit after the feast. Once the chlorophyll is absorbed from the grass, they throw up because some types of grasses are not easily digested

Consider adding liquid chlorophyll to your family and your pet’s diet; even your goldfish

Famous for its anti bacterial and anti-in inflammatory properties. Containing 16 amino (fatty) acids Castor oil boosts the immune system having remarkable healing abilities. Use externally and internally, this oil may very well be at the top of the list. It’s a lubricant in the intestinal tract, eliminating constipation. It kills fungus such as ring worm, mites and most parasites and also heals skin disease

Aloe is a medicinal plant that can be very effective for many ailments externally and internally too. It contains vitamins (A, B, C, and E), more than 20 minerals, Fatty Acids, Salicylic Acid, Lignin, Saponins and Amino Acids

Aloe may be used to reduce high blood pressure, reduce inflammation, heal damaged tissue, reduce blood sugar levels, reduce the effects of arthritis, heal ulcers, increase appetite, and improve digestive disorders. Aloe is a natural and effective treatment in boosting the overall immune system. Aloe has inhibitors that are capable of blocking cancer cells, and keep them from multiplying 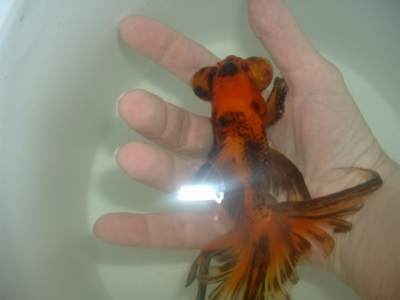 Fish need oil, but like humans, only if it is the right kind of oil. There are many quality oils that benefit health wise, such as hemp oil, Castor oil, coconut, flax seed, sunflower, safflower, grape seed, and my favorite, olive oil. Adding oil to your fish’s diet by premixing with gel food will improve overall health by increasing organ function. An antioxidant, every diet should include healthy oil

We all enjoy Jello gelatin now and then, but did you know that plain gelatin has many health benefits for fish as well as humans? Gelatin consists of partially hydrolyzed collagen, a protein which is highly abundant in some animal tissues such as bone and skin, as well as promoting a healthy digestive system and alleviating constipation

Because gelatin may thicken the blood, it’s important to combine its use with garlic salt, a known blood thinner. Do not feed continuously, but as a part of a healthy diet