Parasites goldfish Koi are easily eliminated using natural remedies. In a healthy natural environment parasite infection is rare. Most parasites have little tolerance for healthy water with a high pH. In captivity, parasites must be introduced into an environment, but this isn’t as uncommon as you might think

Most breeders heavily salt and medicate their goldfish. You might think the risk of infection is low, but such is not the case. Parasites, just like any other bad bugs quickly build a resistance to these substances. Some goldfish keepers keep a constant saline solution in their tank or pond water to reduce the risk unknowingly. The bugs come back again and again. The fish’s organs however, are being compromised from the salts

If medications are being used, the natural ecosystem is at risk

A goldfish with internal parasites may have a healthy appetite, but exhibit extreme weight loss. If your fish is in poor condition physically, you may be underfeeding, or it may be infected. Just like with our dogs and cats, we know that parasites, when left untreated can kill, but in most cases the condition can be treated with the animal making a big come back to good health

Unless you take your fish’s pooh to the vet or a laboratory for examination, you can’t know for sure it’s infected, but if you suspect, avoid the use of dangerous medications which could easily push a sick fish over the edge. these chemicals may destroy the beneficial bacteria in your tank or pond, including the good bugs in your fish’s intestinal tract. Many an infected fish has died from parasites infection, but many more have died from the poisons used for treatment. If not from the toxic medication, than by ammonia or nitrite due to an interrupted cycle

Parasites goldfish Koi. These bad bugs are easily transmitted by other fish, snails and even plants, but are also easily eliminated with natural remedies. You may see white specs (ich) located on any region of the body, or little white blobs (flukes) or anchor worms with their heads attached and their tails waving freely in the water. Unlike internal worms, external worms are only dangerous to sick fish in sick water because they thrive in conditions that goldfish and beneficial bacteria can not tolerate, such as warm water that is low in oxygen

The fish in the photo below is infected with flukes, a leech like parasite, easy to destroy

Flukes or lice on goldfish

The dark spot you see on this fish is a louse, and is buried in beneath the scale. Hard to reach, it’s beneficial to raise the water temperature to 78f to 80f during treatment. Higher temperature encourage the fish to raise the scales in an effort to cool the body temperature, exposing the parasite 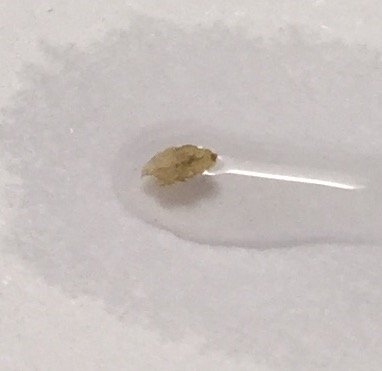 Parasites in goldfish and Koi

Although lice are not as common as ich, they are just as easily destroyed with the use of natural remedies.  The photos above show a gray spot which is actually a louse burrowed into the tissue beneath the scale. The photo on the left shows the louse itself 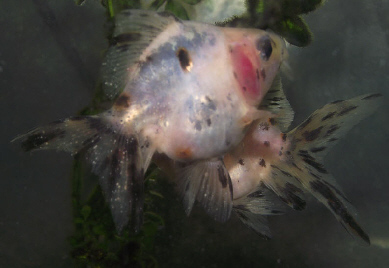 The fish in the photo above is infected with an external parasite called ich, short for Ichthyophthirius; the most common parasite in the goldfish world, and one of the easiest to eliminate

(use for internal parasites)

And or combine with

If your fish have recently been salted or have bloating issues, use Garlic Remedy