How to Secure a Java Fern to a Rock

Microsorum pteropus which is better known as Java Fern, originates from southeast Asia. This plant is highly recommended for beginners and Goldfish keepers alike, it’s relatively hardy and can withstand most conditions including mildly brackish water. Goldfish find this plant a particularly undesirable food source for it has a highly bitter taste. Ideally the plant should be introduced in to a fully cycled tank; however it is possible to add it in sooner with success. Lighting needed for Java Fern is minimal as a result it can thrive in lowly lit aquariums. A highly desirable attribute to this plant is the fact it establishes it’s self on to rock or wood rather than in the aquarium substrate; this is because the roots must always been exposed and never buried. Below I’m going to show you how to secure a Java Fern to a rock:

You should purchase a plant that comes in a little pot with rock wool tightly secured around the roots. Remove the pot and pull the wool away from the roots carefully. Don’t worry too much if the plant has taken hold of the pot, just use a pair of scissors and carefully cut the rhizomes that are attached to the pot. Keep in mind that the plant needs rhizomes so only remove what is necessary. 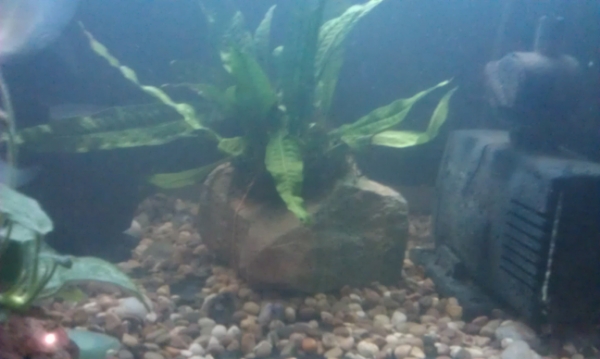 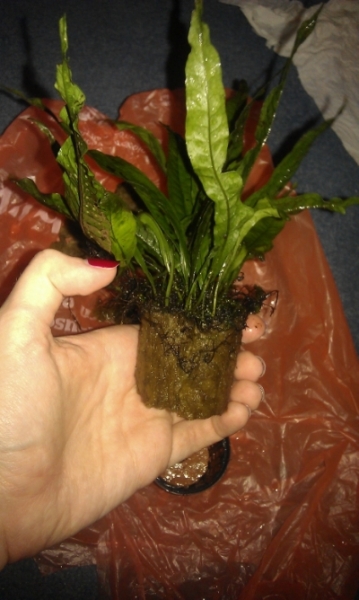 Tip boiling water over the rock if it’s new. NEVER boil a rock as it could explode.

Now take the plant and position it on the rock. Pay attention, remember the aim is for the plant to cling on to the rock so try to place it near a corner or ridge. Once you have the plant positioned secure it with a elastic band. You can purchase wire especially made for this or use cotton. However an elastic band it quick, cheap and easy. 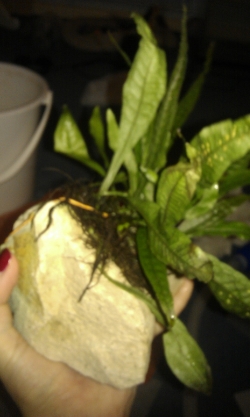 You can now place it in the tank. With in three to six weeks the plant should have taken hold to the rock, allowing you to remove the elastic band. Remember to keep a watch on your PH level and where possible keep your temperature at the higher end of the goldfishes comfort zone (65-72f or 18-22c)

This method will also work with Anubias, another highly recommended plant.