So, a week ago, Amanda had a severely burned tail and redness all over her tail area. I was sure it was septicemia and that she was hemorrhaging and that I needed to start treating her with Maracyn 2. Fortunately, the pet supply store was closed, and I found this forum. I was made aware of so many things, most importantly, that it was the condition of my tank water that had caused Amanda to have nitrite poisoning, not septicemia. I followed the instructions given to me, including studying the 10 steps, which frankly, make me want to say, “I’m Kathy, and I’m a recovering goldfish abuser.” I have posted before and after pics of Amanda which were taken one week apart.

As I began properly cycling my tank, in accordance with the steps, I ran into a big problem…….buckets. I can’t lift them. My tank is pretty far from any water source. I was using my python for gravel cleaning and refilling, but I learned that using tap water for refills is a very bad idea. For three days I used the buckets. Ouch!!! Then I read an article (posted by Shadow) who had a pretty elaborate set up for keeping her water for refills. That was a bit too much for my simple head to handle. But my husband, the tinkerer, and I came up with a pretty simple solution that took just minutes to set up once we had the supplies.

We have a 55 gal tank. Daily water changes of 20% require about 11 gallons of clean, aged and treated water. I bought a 13.5 gal. trash can from Wally World. I got a submersible pump that pumps 264 gal./hr. which is plenty, from Harbor Freight for $20, 10 ft of vinyl tubing and some little bungie cords. I already had a power strip with an on/off button on it.

We set the trash can to the side of the tank, put the submersible pump in with the 10 ft. of tubing attached. I bungied the power strip to the side leg of the aquarium stand to make it easy to turn on and off and that’s it. We have a python with 50 feet of tubing. First, I take some (a little) tank water and put it a bucket for use in rinsing the filter sponges and plants. Then I do my gravel vac into the sink. Then put the new water hose into the tank, turn it on and presto!!!! Tank fills back up with nice fresh aged water, and at a good pace, not too fast. Then after running some clean water from the faucet through the python, I use it to refill the trash can with conditioner for use the next day.

Big submersible pump I ordered for inside the tank didn’t come today. Darn. That will be going in right in the middle as soon as it gets here. I’ve got good movement on the surface now with the fan, but the pump will help a lot. 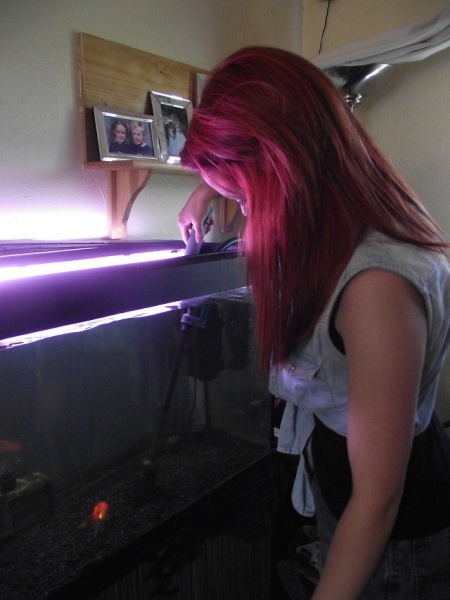 I am letting my water stand for 24 hours with a pond pump added to fresh water tub; to eliminate sat gases, and I got the lower pressure pump so I can let it fill slowly. I also stop it from filling now and then. I made another change yesterday. I got another 13.5 gal. trashcan exactly like the first one and put one inside the other. My husband wanted us to have a little insurance in case the water load was too much for the can. We are pretty sure that’s not an issue, but a double can is better I think. While looking for the second trashcan I noticed something that might be of some value to others. Wally World has rolling laundry carts in a pretty good size. If I didn’t have a longer python that reaches my setup, I would get one of those and put the trashcan inside of it so it could be rolled to and from the water source. We actually looked for a rolling trashcan to begin with but found them to be too big. Of course now we are looking at upgrading to a 90 gal tank from our 55. Go big or go home!! (some say) I will likely be looking for a bigger holding tank as well as articles and discussions on filters for bigger tanks. I’m feeling a lot more confident, but I know I still have lots to learn.
Cheers!
Kathy