Cloudy Goldfish Water could indicate one of a few things

Cloudy goldfish water may be a bacteria bloom; bad bacteria. These clouds are whitish in color, and indicate the ecosystem isn’t healthy. A cloud could be caused by spawning activity, and if this is the case, the cloud will clear in a short time. The cloud will be accompanied by a fresh fishy odor. Clouds are sometimes caused by supersaturated gases found in freshwater, caused by pressure. SSG are concentrated amounts of oxygen found in tap water. These tiny bubbles float freely in the water causing a cloud, however, they also cling to the decorations; gravel; tank walls and even worse….your goldfish

When a cloud comes and doesn’t go away; the pump isn’t delivering enough of the right kind of action, no matter the cause

Yellowish or greenish colored clouds are caused by algae forming in a new set up; called an algae bloom. Algae forms as the nitrogen cycle completes and nitrate levels climb. If there’s not enough water movement, algae continues to float freely in the water; deepening in color and consistency; called green water algae. Free floating algae takes up space in the water, keeping oxygen from enter, and although algae is welcome in every goldfish house, only the right kind, which is substrate algae

Waste is heavy and settles to the bottom of the tank in a short time. We use a gravel vacuum to remove accumulated waste and sponges to collect what the vacuum doesn’t. Goldfish waste is easily stirred up by their search for food. This causes a cloud in the water, however, only for a short while. These types of clouds are typically close to the same color as the food that the fish are being fed

Is cloudy water dangerous to goldfish?

Clouded water indicates oxygen levels are low. You may see the fish at the surface gasping for air; not good

Increase the movement of water and in the process, discourage clouds. Expose the surface water to fresh air by removing the top. Wrap thick sponges around the intakes of your pond pumps. Rinse the sponges with every water change. No matter the cause of a cloud, the proper set up and maintenance will eliminate it 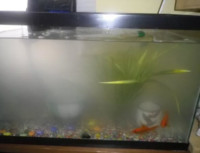 White clouds are caused by bad bacteria free floating in the water. We call this a bacteria bloom as seen in the photo
Notice the insignificant amount of surface movement; the water almost stagnant