Goldfish Slime Coat protects the fish from infection and disease

Goldfish slime coat is vital for good health. A healthy goldfish or Koi living in a healthy environment has a protective out layer of slime we call slime coat. This slime coat keeps the fish safe from infection caused by bad bacteria, fungus and parasites, and much more

What does the slime coat do?

Because we sometimes have the need to handle our fish, the slime coat protects them from the germs we could pass along. Even though we go to great effort to rinse our hands well, we’re not doctors scrubbing for surgery, we’re only human, and we carry a great number of unhealthy bacteria on our hands. Before feeding or handling goldfish, rinse hands in hydrogen peroxide to disinfect safely. H202 is safe to use, and will not harm goldfish

Because in a cycled goldfish house there’s always the risk of a spike, ammonia is less harmful to goldfish wearing a heavy coat. Ammonia burns the outer layer of tissue. Carbonate hardness also has the potential to burn fish at high levels. If your freshwater has high levels that have to be lowered, or if the levels are too low, and buffering is necessary, having a healthy slime coat could protect your fish from accidental burns

Sucker fish are attracted to the slime coats goldfish wear, and because their nibbles can lead to serious infection and the destruction of the slime coat, they should not be kept with goldfish

The chemicals used in water treatment can be considered as toxic, we must use it with the greatest of caution. The lesser of two evils, we must rely on it to convert chlorine and chloramines in a cycled goldfish house and we must depend on it to convert ammonia and nitrite during a cycle or even a small spike. Even though most of us count on it, and use it daily, these water  treatments have the potential to burn the tissue on humans and goldfish alike

The slime coat will help protect our fish from these substances

Things that may reduce or destroy slime coat

If your goldfish house is healthy, then so are your goldfish, and if your goldfish are healthy, they have a healthy layer of slime on their bodies, but goldfish kept in water with poor value, lacking in minerals and oxygen, or medicated water may not be so lucky. Chlorine in freshwater that hasn’t been converted, or too few or no beneficial bacteria present or even over handling are all things that could lead to a loss of slime coat

How to make sure your goldfish has a healthy coat

If you have reason to believe your goldfish may not be wearing a healthy layer of goldfish slime coat, administer the salt bath

There are two types of slime coats; one that forms naturally from within the fish and the one we use in a treatment, such as aloe. Salt slightly irritates the tissue, causing a slime coat to form from within naturally. Whereas aloe coats the fish’s body with a protective layer. The two should never be combined, but the treatments performed one at a time

After the round of salt bathes are completed, follow up with a round of aloe tonics
Perform tonic three times a week first week; twice a week second week and once the third week

The once orange goldfish in the photo below has been burned by ammonia, if you notice the whitened areas on the body. It may not have been as  severely injured had it been wearing a health slime coat. Instead it was living in an unhealthy environment with water low in mineral content and low in oxygen. The top loading filter was washed consistently with the carbon cartridge replaced frequently, causing the cycle to continuously start and stall, putting the fish at risk 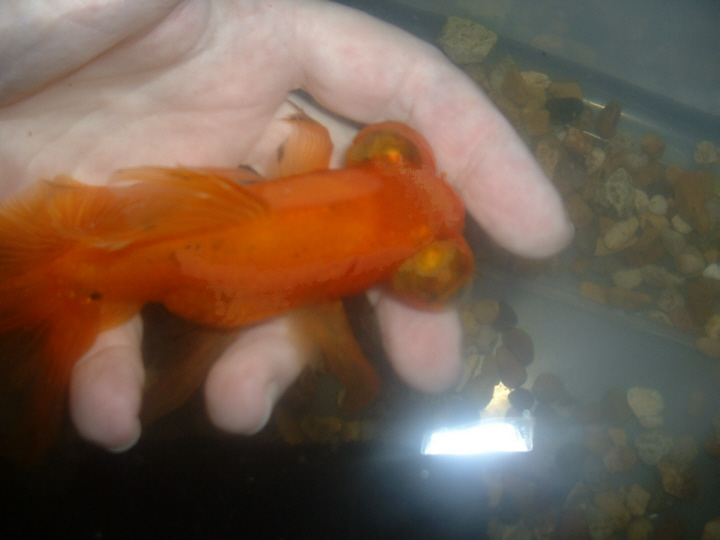 There are some water treatments available that claim to improve and increase slime coats, such as Stress Coat, but some of these products contain synthetics which may not be beneficial

10 Steps to Goldfish and Koi Care