Isolation tank should only be used if the fish house water quality is compromised. Most goldfish or Koi are sick due to poor water quality, not disease. A mistake some goldfish keepers make is placing the sick fish in a hospital tank to avoid infection

If the goldfish keeper isn’t keeping the main tank well, there is little hope the hospital tank will be kept any better. Most of these tanks are set up with bubblers or air pumps which do not oxygenate the water. Most of these tanks will have ammonia present within two to three days, and the fish’s condition will worsen and then it will die

The Koi in this hospital tank setup goldfish and Koi was moved from its pond due to a floating issue, making is vulnerable to predators. It won’t live long in this water. It’s filled with supersaturated gases; the fish unable to breathe

New goldfish are often placed in quarantine, and these set ups are typically the same. The fish is subjected to ammonia. The water is low in oxygen. The goldfish keeper is unaware, believing the new fish was infected or diseased

Warning: Goldfish that have suffered from nitrate poisoning or shock need deep water. Nitrates should be kept at 10 to 20 ppm at all times. This is especially important for goldfish in shallow water

Transmittable disease in the goldfish industry is rare

The best way to avoid the risk of infection is to create a healthy ecosystem in the main tank or pond, so all of the fish have healthy immune systems. Healthy water makes for healthy goldfish

A goldfish that has been injured or a goldfish experiencing swimming issues may not be able to navigate the current in a typical set up, and may require isolation because of it. If an older female is in need of estrogen remedy, treating in an isolation tank will keep the other fish that don’t need estrogen safe. The same is true for a fish requiring antibiotics. Antibiotics destroy bad bacteria, although the chemicals also destroy good bacteria in the tank or pond and the fish as well, lowering the immune system or even destroying it. If you’re certain your fish needs antibiotics, it should be medicated in isolation, however most fish will benefit more by using natural remedies, which can and should be administered in house so the entire school and the ecosystem as well can benefit

How to set up a hospital tank

If you find it necessary to isolate a goldfish, use a 20 to 30 gallon plastic, square tub that is shallow and has a large surface area. Fill the tub with fresh tap water. Eliminate supersaturated gases by working the water over. Use water treatment that converts chlorine and ammonia, treating the entire amount of water in the tub. The water should only be as deep as the fish is long from head to tail

Set up a fan so that it blows across the surface, disturbing it. There’s no need for a pump with this method, however, the tub wil not be cycled, so special measures should be taken to keep fish safe from ammonia

Perform small and frequent water changes in the container using the tub water as your freshwater source. Take one hour for every 10 ppm of nitrates in the main tank or pond water

When you believe most of the container water has been exchanged, transfer the fish to the tub

For every day the goldfish is in isolation, perform 50% daily water changes. Use fresh, worked over to remove supersaturated gases. Use treated tap water; treat entire amount of water in tub daily

Point a fan at the surface to disturb it. Shallow water assures that carbon dioxide doesn’t build up in the body of water. The slightly agitated surface will encourage the water to absorb oxygen eliminating the need for a pond pump 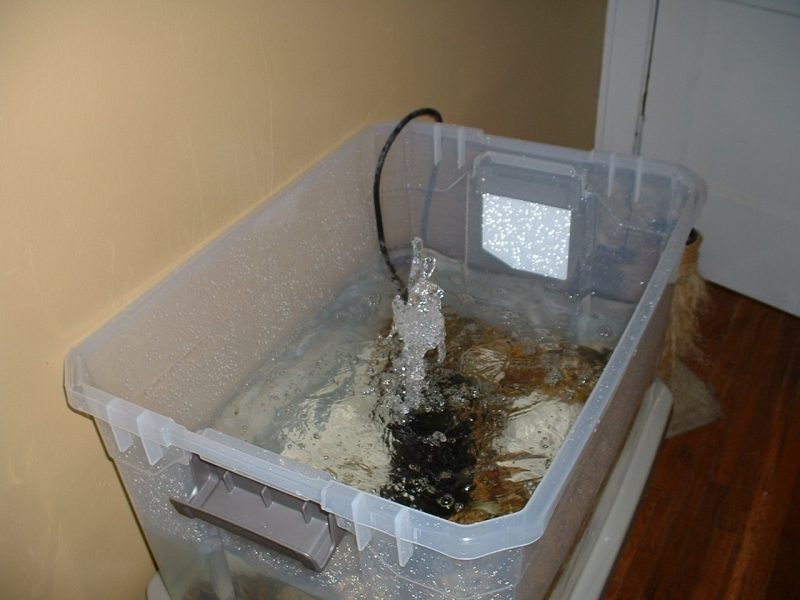 Remove supersaturated (SSG) gases from tap water by pouring the water a few times; let it hit the freshwater bucket hard to break up these gases that can suffocate fish. Test by scooping freshwater up in a clear glass. Let it sit for a good half hour. Do you see tiny bubbles forming on the sides of the glass? If so, keep pouring

The tub in the photo above has a pond pump cranked up, prepping the water for the fish. The pump is eliminating SSG as well as oxygenating the water

Created from waste, ammonia is deadly to goldfish. The water in a hospital tank must be treated with water treatment that converts ammonia to a safe form during the duration of the goldfish’s stay