Parts of a Goldfish

Part of a Goldfish are shown in the diagram below

Parts of a goldfish doesn’t have to remain a mystery. Have you ever wondered where the swim bladder organ is located, or where exactly the dorsal fin is? The diagram below will help you to get more familiar with your goldfish and its anatomy. When describing an issue in a forum, it’s important to to name a specific part of the body

Goldfish are strange creatures. Unlike most of our pets, they don’t have legs or paws. Instead, they create motion with their fins, and it seems to work quite well for them. They don’t have eyelids because they’re just not necessary in their native habitat. The sun doesn’t shine in the depths of the water

Have you ever wondered how goldfish breathe? or if they breathe? Goldfish don’t have lungs, however, they do need oxygen. Fish pull water in through the mouth, and push it out through the gills. As water passes over an organ called the rake, oxygen is absorbed from the water. This is just one reason your aquarium or pond water must be properly oxygenated

Goldfish do have skin, but it’s covered by scales. Scales act much like feathers on a bird, a protective coat for their tissue. More importantly, scales help them glide and move more efficiently through water. This is critical in their environment if they are to escape predators

Fish have been around much longer than man, and may be one of the first living creatures on each. If we’re going to keep them in captivity, we must learn eveything we can about them to keep them happy and healthy

Anatomy of a goldfish 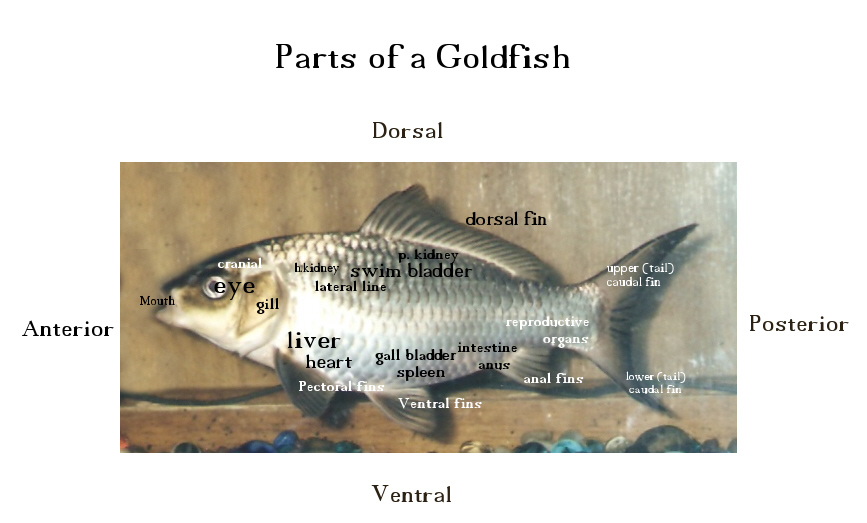