Cold fish are healthy fish. Goldfish and Koi are cold blooded, meaning they have no core body temperature. Their body temperature matches that of their environment. Their ancestors, the Gibel carp swam the icy cold rivers of China. These fish thrive in cold water, and we can use this attribute to our advantage. Reducing tank temperatures is a great way of buying time in a crisis; placing the fish into dormancy. Goldfish begin dormancy at 54f and are fully dormant at 45f. You will still see slow gill and body movement, but they will not eat nor are they very responsive. No, the cold does not hurt a cold blooded animal like it would a warm blood one like us

Goldfish and Koi both can tolerate warmer temperatures up to 74f, and sometimes a little higher if conditions are right, but this doesn’t mean they should be kept in these temperatures. Their immune systems are compromised in warmer water for more than one reason

Bad bacteria flourish in warmer water; beneficial bacteria are weakened. With no internal cooling system, goldfish can and will cook in too high of temperatures. You may see them raise their scales in a futile effort to cool their bodies. Some goldfish have been known to leap out of the water in an effort to escape

A goldfish is a goldfish no matter what breed or variety. No matter how fancy or how common, your goldfish requires colder water to maintain its good health and longevity. A healthy ecosystem for a goldfish also requires heavily oxygenated water. Some aquarium plants are tropical, and should be placed in tropical tanks with tropical temperatures. Placing these types of plants in a goldfish aquarium invites root rot which invites bad bacteria and adds to the bio load, but some plants, such as algae and duck weed, thrive in very same environment as goldfish, requiring cold and heavily oxygenated water. If a tropical plant is thriving in a goldfish aquarium, the goldfish are not

Bad bacteria and parasites alike become dormant in cold temperatures, becoming more and more active in warmer temps unless of course the water reaches extreme high temperatures closer to the boiling point which destroys them

Goldfish can tolerate extremely low temperatures as long as it remains above the freezing point of 33 degrees Fahrenheit. Goldfish survive extreme winters in ponds only when the pond’s bottom is below the freeze line; meaning the point of depth in the grade that doesn’t freeze in extreme cold weather

Because goldfish are cold blooded they become dormant in lower water temperatures. When a goldfish begins to enter dormancy their blood flow decreases, and so does their need for oxygen or food. The colder your tank or pond water, the slower the fish. The warmer the water, the faster the blood is moving, the more oxygen the fish uses. Toxins or bad bacteria are much more dangerous in warmer water because of it. We can use this to our advantage when problems arise in our tanks or ponds by lowering water temperatures; buying some time

As the water temperature increases in the summer, so should the oxygen levels. Make sure your tank or pond has plenty of surface action powered by a real pond pump that’s sized appropriately. Make sure your tanks are uncovered, and exposed to fresh air. In warmer weather it’s beneficial to point a fan at indoor tanks and ponds. This keeps the water cooler, and the oxygen levels higher

Remedies and tonics are more effective in warmer water; the treatment more beneficial due to increased blood flow and overall organ function. Parasites and bad bacteria both become more active and vulnerable to treatment in warmer temperatures ranging in the higher level of the comfort zone

If you’re leaving home for a few days in the winter; turn your thermostat to 54f. Your fish won’t have to be fed because they will be in a semi state of dormancy, and if your tank is cycled, so will the beneficial bacteria. When you return, turn the thermostat back up to a comfortable level. The water will warm gradually. The fish’s body temperature will warm with it, along with the friendly bugs, with no spikes or no starving fish. Things will be pretty much the way they were when you left them.

If you’re leaving your fish in the summer, you’ll need someone to feed and perform water changes

When temperatures fall below 64f feed food that is easily digested. Feed toasted wheat germ at least once a day, and feed peas, blanched lettuce or spinach; foods high in roughage. Reduce the amount of regular food being fed, such as pellets or flakes. This assures the fish’s slowing digestive system isn’t overwhelmed, which can cause constipation. When temperatures drop to 54f; stop feeding. Some fish may still be active, and show signs of wanting food, but don’t be tempted. Feeding in these cold temperatures leads to serious digestion issues, and can cause the fish’s intestinal tract to become impacted; causing floating issues

If algae is present in your tank or pond, the fish can indulge in this super food source without experiencing any digestive issues

The swim bladder is connected to the intestinal tract where gas is exchanged; giving the fish the ability to sink or rise at will. When the intestinal tract is blocked, the gas exchange is disrupted, and as the fish’s metabolism slows, the bladder function will slow also. It’s important that a goldfish experiencing dormancy has a clear tract to prevent serious floating issues. If this happens the fish should be warmed, and the digestive tract cleared before the temperature is lowered again

If your goldfish are kept indoors, their tank water is probably at room temperature year round; 68 to 72 degrees. These are healthy temperatures for goldfish. Temperatures rise in enclosed tanks with intense lighting, leading to dangerous conditions

Goldfish reach complete dormancy at 44 degrees Fahrenheit, but even so, you may still see activity. The fins, the mouth and the gills still function; just slowly. The colder the fish, the slower the fish. At temperatures of 34 degrees, the fish has little if any movement, and may appear to be dead or dying, but as the water warms, the fish warms, gradually coming back to life. The miracle of nature 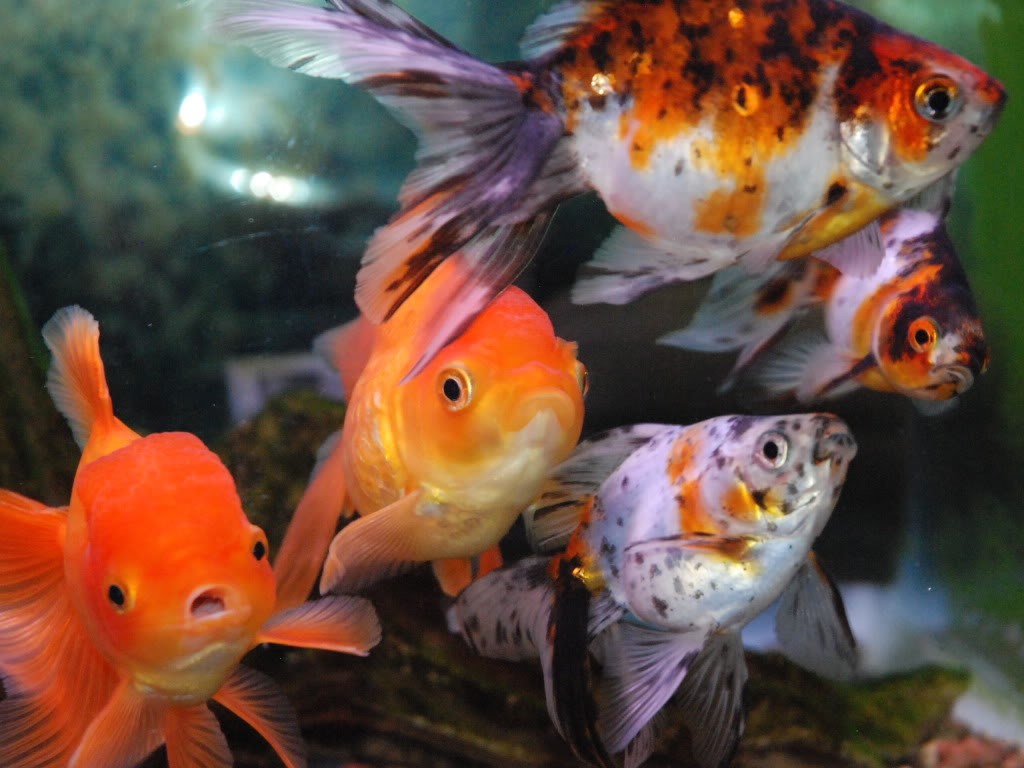 A goldfish lifesaving technique involves reducing body temperatures to 44f, for an hour or longer, and then allowing the fish to warm gradually to room temperature. Anoxia occurs when tissue is deprived of oxygen. This process of re oxigenating the bloodstream has been proven to be effective

Sick fish are best kept in colder temperatures until the source of the illness or condition is determined, and a treatment plan in place; 44 to 54f, depending on the severity of the condition

Raise temperatures to treat with natural or medicinal remedies. The increased blood pressure assures the fish is reaping full benefits from the treatment, but make sure the oxygen levels are high

The lower side of the comfort zone is preferred by goldfish. If you don’t believe it, just ask them. If you’re having trouble keeping your indoor aquarium cool in the summer, freeze stones, and place them around the floor of your goldfish house. Freeze several to alternate, and size according to size of tank. If the looks of your aquarium is all important, there are some beautiful rock, but make sure there are no sharp edges that can injure fish