Malnutrition in goldfish is common due to fasting and underfeeding

Malnutrition in goldfish is not uncommon due to lack of education on the topic. Malnourished goldfish or Koi exhibit poor general health, looking concave. In some of the more serious cases become the fish becomes listless, showing little interest in eating or spawning; the goldfish’s favorite activities

Withholding food to keep the fish house clean is a trend in the industry. This habit is not only cruel, but leads to an unpredictable cycle, if not a broken one. The beneficial bacteria that create the nitrogen cycle depend on the waste your fish produce, and they depend on consistent production

Goldfish that have been neglected; their goldfish keepers too busy or thoughtless to consider their needs, not realizing goldfish need to eat regularly. They’re thought of by some as ornaments, not living creatures. In some cases goldfish are purchased for a child as a pet, but if the parents are unaware, or negligent in teaching responsibility, the wrong kind of lesson may be learned. Children must be taught respect for all living creatures

Goldfish that have internal parasites reap little benefit from food. Parasites steal the nutrition they need to survive. These fish have healthy appetites, and can live for months, even years without showing obvious signs, but in most cases,  the fish will eventually die a slow and lingering death; the goldfish keeper unaware

Some of these goldfish are in water with high levels of nitrates continuously; the goldfish keeper unaware of the nitrogen cycle, or negligent of his or her responsibilities. The levels may not be high enough to quickly kill the goldfish, but high enough that it experiences loss of appetite, and eventually dies before it succumbs to nitrate poisoning leading to malnutrition in goldfish

The goldfish in the photograph below were fasted for days at a time, the owner thinking less waste made for a healthier environment. Just like all animals, goldfish must eat 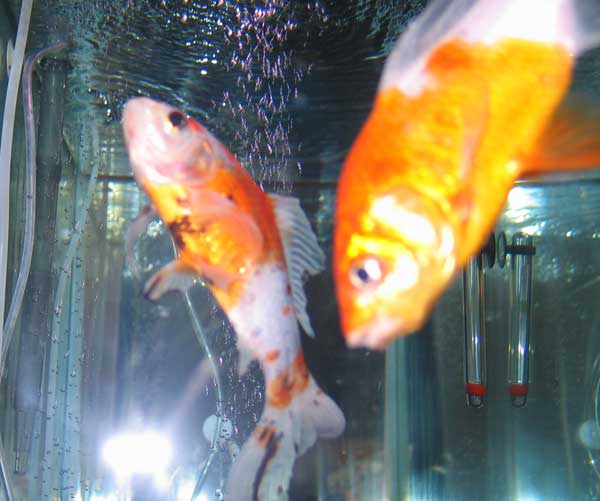 Some goldfish may be kept in water that is poor in value; water that has little or no general hardness. General hardness is made up mostly of magnesium and calcium. These minerals are very important to goldfish health. Even though they’re also found in goldfish flakes and pellets, the content may not be enough to keep our goldfish healthy. Over time, the health of these fish may deteriorate, causing loss of appetite and weight. If the value of the water isn’t improved, the fish will eventually waste away

10 Steps to Goldfish and Koi Keeping