It’s not common, but it can happen. A goldfish can get gravel stuck in its throat or nostril on occasion, and although gravel does pose a risk of swallowing a stone, it’s important to keep a thin layer on your pond or aquarium floor. A favorite pastime, goldfish enjoy pecking through it in search of an uneaten morsel. Gravel offers a resting place for debris and uneaten food which may be removed with a gravel vacuum during your weekly maintenance

Goldfish take in water through their mouths and nostrils, and then expel it through their gills. As the water is expelled, oxygen is absorbed. Because of this, it’s important that a lodged stone is removed as soon as possible. Most fish that have a stone lodged manage to expel it on their own after a short time, but if an hour or so has passed, it may be wise to remove it. Goldfish can go without oxygen for 24 to 36 hours without suffering permanent damage

Using natural shaped stone such as pea gravel may keep this from happening in the future. Natural stone is oddly shaped, unlike the painted rock found at pet shops

It may be beneficial to reduce the temperature of the goldfish until you’re prepared to remove the stone. Goldfish become dormant in colder water, needing less oxygen. This will also relax the fish a bit during the procedure. Chill tank water in the fridge until icy cold. Pour all around tank slowly; refill and repeat until water temperature is 60f

It may be easier to perform procedure in a smaller container

If the fish is a fighter, scoop the fish up in a container. Exchange one cup at a time of container water for chilled tank water until the container the fish is in is 50f

If you have someone to assist; one person may hold the fish in the water; it’s head just above, during this procedure; if not, it may be necessary to lay the fish on a clean towel. Make sure the area is well lit

To catch a fish

Use a container or a plastic bag to catch up the fish. If you use a net, keep it below the surface and scoop it up into a container. Raising a fish out of the water in a net may cause it to thrash about, injuring it

Do not use sand in your pond or aquarium. Sand gets into the gills and causes serious issues. It also harbors harmful bacteria

Cup your hands gently around the fish and lift on to the towel. Most fish will stop struggling after a few moments, but if the fish continues to thrash, it may be necessary to anesthetize it; follow link for instructions  Anesthetizing Goldfish

Using a pipette, such as a tiny straw from a box of juice or a small piece of tubing, place one end on or near the stone, and suck gently on the other end. If the fish is large, you can also use a pair of blunt nose tweezers or the rounded end of a large bobby pin, gently push the prongs past the stone, and pop it out

The fish in the photo has a stone lodged in its nostril. Unusual, but it happens. Although goldfish don’t take in oxygen through the nostrils, they do take in water and sense odor as it passes through 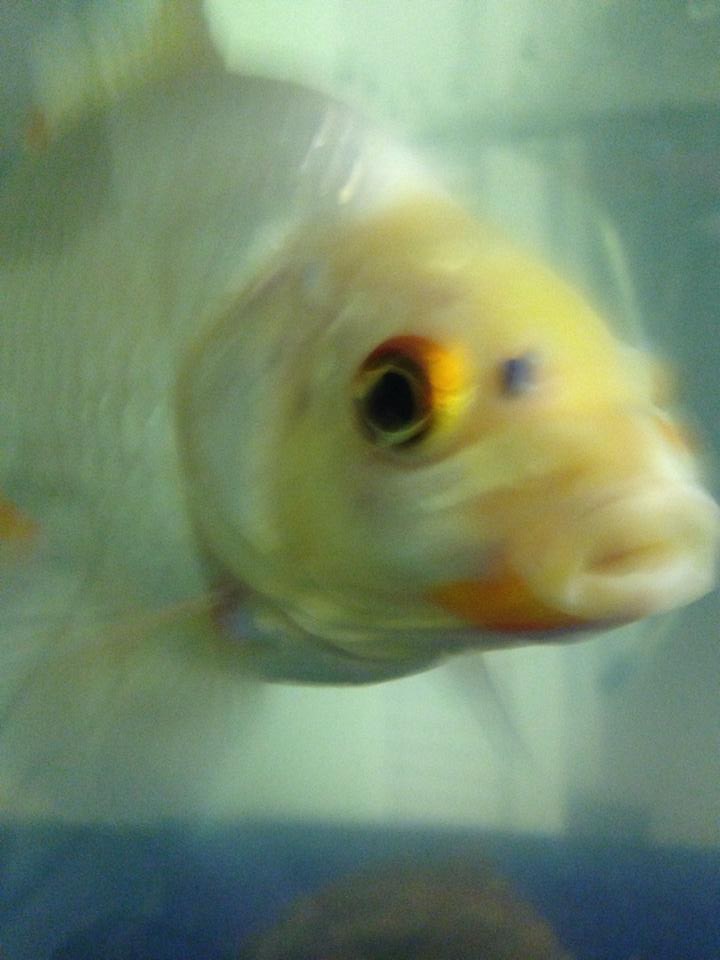