Goldfish Abuse or Neglect is all too common in the Industry

Goldfish abuse is taken lightly, however, they may be the most abused creatures on the face of the earth. Unfortunately, society views them as a feeder fish with little value. They are labeled as having no emotion, no sensation of pain and no memory, but such is not the case, as any real goldfish keeper knows

Neglect is a form of goldfish abuse. Goldfish frequently are forced to live in small bowls, and soon forgotten. Days may pass before the water is changed or the fish fed

The breeders handle them roughly, and over salt their tanks to reduce bacteria. The less than perfect fish are culled from the school and tossed heartlessly in the trash. The lucky survivors are shipped in small bags of water and often deprived of oxygen in the process. When they arrive at the pet shops, without being acclimated they are dropped in tanks of water that more often than not are high in nitrates, too warm of water conditions from the bright display lights, low in oxygen and heavily medicated to reduce the risk of infection. There is, there always has been, and there always will be goldfish abuse

Some goldfish will be placed in even smaller bags than those they are shipped in, to be handed out at a fair as a prize. Some will be placed in tiny dishes as a centerpiece on a table. Some will be examined by a class of biology students, and some may even be swallowed by a college student on a dare, and although it sounds horrible, it may not be the most cruel form of abuse. One male teenager mailed the family’s pet goldfish in a regular envelope to a girl as a prank. Thankfully, the post office found it before it was delivered

Goldfish kept in ponds are sometimes left behind when the owner moves. Many a goldfish has been found in a pond with a few inches of rain water by a new home owner. Fortunately, SPCA rescues all animals, including goldfish

Most goldfish will die before they reach 3 to six month after hatching. Some will be poisoned by ammonia or nitrites, or placed in tiny bowls, or large enclosed tanks causing oxygen deprivation. Some will die of bad bacteria or parasite infection. Some will die from neglect in dirty water that is high in nitrates. Some will be eaten by other fish, and some will starve to death forgotten. Some will be overfed and die from blocked intestinal tracts. Some will cook in a small container placed too close to the kitchen or over a heat vent

The fish in the bowl below were well kept; their owner unaware of their needs. A few of the lucky ones, the owner moved them into a large aquarium after learning how to care for them 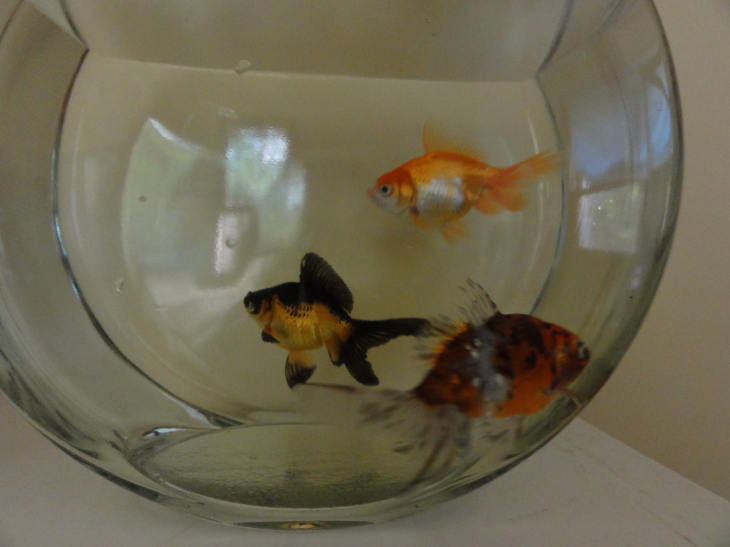 I’m not sure how many goldfish are bred and how many of those fish will die before they reach their first year, but when you look at your goldfish swimming in its healthy ecosystem, know that it could be one in a million; a very lucky fish