The lonely goldfish is a sad goldfish. There’s more than one reason to have more than one goldfish. Safety in numbers; goldfish need to be with other goldfish, not kept alone. Goldfish alone experience higher stress levels due to increased levels of fear. Stress is a leading factor in disease, and often shortens life spans. Goldfish are prey fish, although they prey on fish that are small enough to eat, and are considered as predators themselves. Goldfish live in fear, much like rabbits. Goldfish in schools, even smaller ones feel safer. Two goldfish are better than one; three better than two

Goldfish need companionship. They form strong bonds with other fish and share the need to interact socially. They don’t mate for life, or should we say they’re not loyal mates, but given the choice, they will remain with their friends for life. Goldfish can become depressed if denied companionship, and even die from a broken heart if they’re separated from their companions or friends; their fish family so to speak. The lonely goldfish is a sad goldfish indeed. Over the years we’ve seen many a healthy fish die after it’s tank mate passed for no apparent reason. One fish began swimming into the glass to get to its reflection. Another fish stopped eating, and soon perished

The bigger the school, the bigger the chance for a mixed gender tank or pond. Female goldfish need help to release eggs during the spawning event, and if alone or with other females, can become (egg bound) impacted, which can lead to infection, which can lead to premature death. If the lonely goldfish is a female, she may eventually die, if not from loneliness, than from bad bacteria infection due to impacted eggs

One or two goldfish best

The fish in the photo below are besties 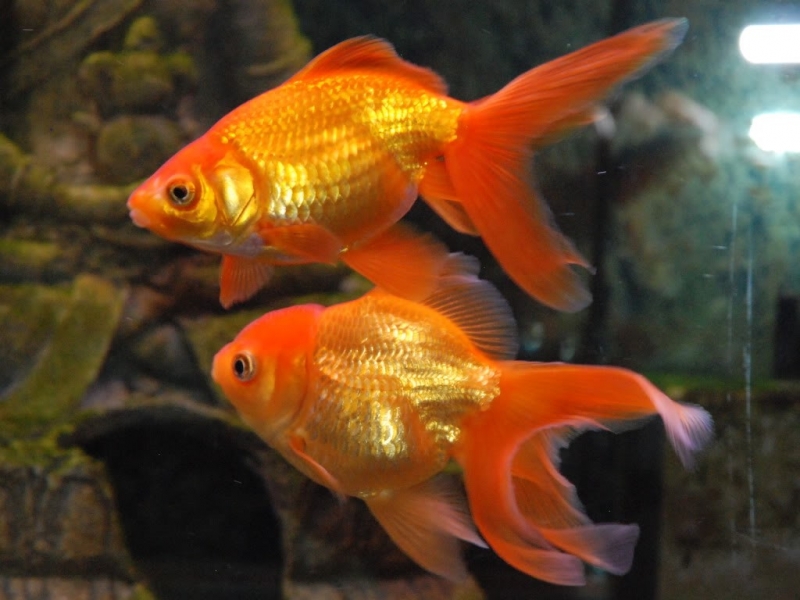 Is your goldfish lonely?

Is Your Goldfish Getting Any Action?
All rights
Author: Brenda Rand