Goldfish yawning and hanging out at surface

Goldfish yawning or gasping at surface in an effort to breathe, due to the fact there is little or no oxygen in the tank or pond water. Goldfish take in water through their mouths, and push it out their gills. Oxygen is absorbed from the water as it passes over the rake, an organ located inside the gill. The rake is equivalent to our lungs, providing oxygen to the bloodstream

The higher the goldfish rests in a body of water, the lower the oxygen levels in the water, normally due to the carbon dioxide created by the waste goldfish produce. Co2 hangs heavily on the bottom where waste settles. The greater the levels of Co2 in the water, the less oxygen

Water must be free of gases in order to be oxygenated. A natural body of water has a great deal of surface area; always moving, however slightly. Called method of diffusion’ water movement pulls Co2 from the depths as it absorbs oxygen from the air, however, it takes more than action to oxygenate water

Few goldfish keepers understand the needs of their fish nor the water they live in. Goldfish come from the rivers in China, and because of it, they require cold and fast moving water; water rich in oxygen and minerals. All too often, goldfish aquariums are enclosed with filters that hang on the top, although, these types of filters do not oxygenate water. Only a real pond pump creates the necessary action needed to clear a body of water

Water surface must be exposed to fresh air. The body of water must be free of gases created from waste or pressure found in tap water; free of clouds created from green water algae or bacteria blooms. Only a real pond pump is capable of getting the job done

Last, but not least

Carbonate mineral (KH) giving water the ability to support oxygen, is a part of pH. The comfort zone is 70 to 120 ppm, however, why settle for less 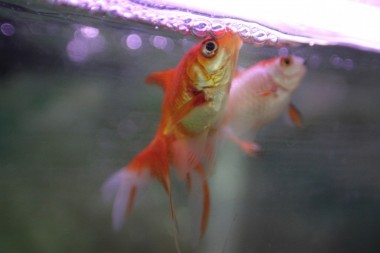 It’s not just the fish that need oxygen, but the environment they live in. Heavily oxygenated water is free of fungus, bad bacteria and parasites

Back to symptoms and ailments