Test water parameters to make sure your fish are safe

Test water parameters if you want to know the real story about your fish water. Tests are difficult to read, requiring a little practice. Test strips are less expensive, however, and found to be accurate with comparable readings to the more preferred method of testing; test tubes. Keep your test kits in a cool dark place to extend the shelf life

Never dip test strips directly into tap or tank water. The regents used in the tester is toxic

Not being able to withstand freezing temperatures, goldfish and Koi are cold blooded, becoming dormant in colder temperatures. As water temperatures drop, these freshwater fish breathe less oxygen, eat less or nothing at all, however, this marvelous attribute gives us a method of keeping them safe from toxins, low oxygen levels, or even parasites and bad bacteria

Lowering water temperature is an effective method of protecting your fish during times of stress. Beneficial bacteria thrive in the same conditions as goldfish. Both begin dormancy at 64 degrees Fahrenheit, and should reach a full state of dormancy at 44f

Chlorine is used by our small cities to destroy bad bacteria in tap water, although, chloramines (ammonia combined with chlorine) is used in larger cities to give water staying power. Use water treatment to eliminated before adding to fish house

In a goldfish house that has not completed the nitrogen cycle, test for ammonia and nitrite, however, in a cycled house, test only nitrates are present

Symptoms of ammonia poisoning may include; clamped fins; burns which later turn to black marks

Symptoms of nitrite poisoning may include; bottom sitting; loss of appetite; red streaks in fins; red blotchy patches on body

Due to the fact that goldfish and Koi use less oxygen in colder water, ammonia, nitrite and nitrate are less dangerous in cold water conditions

Ammonia (NH3) Zero is the goal. This first toxin in the nitrogen cycle to be created from decomposing fish waste. Goldfish have no tolerance for ammonia

Nitrite (No2) the 2nd toxin in the nitrogen cycle converted from ammonia. Goldfish have no tolerance for nitrite; Zero is the goal

Nitrate (No3) the third and final toxin in the nitrogen cycle converted from nitrites. Goldfish can tolerate in low amounts, preferring consistent levels of 10 to 20 ppm. When nitrate levels are high, reduce gradually to reduce the risk of nitrate shock

When using water treatments, gypsum (calcium), Epsom (magnesium), bicarbonate of soda or other buffering agents, premix in freshwater before adding to fish house. You may have to experiment to find just the right amounts to use with your regular water changes. Test before and after altering parameters. Because every body of water is unique, more or less of each substance may be required to obtain the desired reading


pH or Potential of hydrogen

We’ve seen it written that the neutral zone of pH is 7. ppm with levels below meaning the water is acidic, and anything above being alkaline, although, only carbonate mineral readings should be measured to see how base or acidic water is. pH is a measurement of oxygen combined with carbonate mineral. Carbonate mineral (KH) alone is responsible for how alkaline or how base water may be with pH indicating how well the water supports life

If pH is closer to the low side of the comfort zone, measure KH first and foremost

Closely related, both parameters depend on carbonate mineral for value. The difference between the two however, carbonate levels can and should be measured apart from pH, relying only on the amount of carbonate mineral present, whereas pH also relies on oxygen levels for its measurement. Many fish will die from carbonate poisoning because KH levels were ignored. In most cases, a pH crash is caused by inadequate water movement; the goldfish keeper unaware

Symptoms of low pH or KH levels may include; gasping at the surface, reddened gills, bulging eye, pop eye, bleeding from eye indicating a pH crash

KH (carbonate hardness) and GH (general hardness) together are what we refer to in tap water as ‘the total hardness’ of ‘a given’ body of water, although, the two are unrelated, and should be measured separately

To lower KH levels use white vinegar by premixing 1/8 teaspoon vinegar in freshwater; test; repeat and adjust amounts accordingly. Little by little so as not to drop levels too low

GH or General hardness indicates the level of minerals found in all tap water; low levels (soft water) affects the general health of your fish, leaving them susceptible to disease and infection, shortening their life span

Calcium is more common in most regions than magnesium

How to raise GH

To lower GH use distilled or RO (reverse osmosis) water containing no minerals which will also lower KH, however, be prepared to buffer with regular use 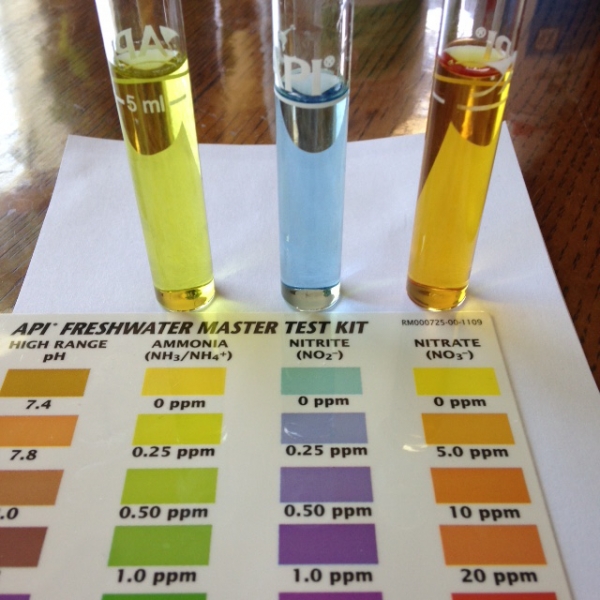 Regularly test water parameters. The test results above indicate a healthy cycle with low reading for nitrates, zero levels of ammonia and nitrite

Potential of hydrogen can tell us whenever water is properly oxygenated, however, only if we fully understand the parameter. A combined reading of KH (carbonate mineral) and O2 (oxygen) pH tells the story

KH gives water the ability to support oxygen. This parameter alone is responsible for alkalinity. Whenever pH is low, test KH and buffer to high end of the comfort zone. Test pH again. Stubbornly low levels indicate tank or pond water possibly filled with Co2 (gas created from waste) or the aquarium is enclosed

Oxygen (O2) is essential for nearly all types of life. Higher levels of oxygen are found in water that has a higher KH and pH reading. Normal test results are 7-10 ppm with the higher side being the goal

Carbon dioxide (Co2) is a product of the biological combustion of oxygen and carbon which is a waste product of animal metabolism and plant respiration. CO2 levels have a direct affect on the buffering capacity of fish water altering the pH and KH by filling a body of water, keeping oxygen from entering. Co2 can only be removed by means of water movement

Every body of water is different, and because of it, we can’t predict buffered levels compared to existing ones, because some water resist buffering while some water is very responsive