Fancy goldfish breeds are still goldfish at heart, but they’ve been bred for different body styles with various features. It all started with the common goldfish bred from the Gibel carp, and ever since, the breeders have worked hard to create other more exciting varieties

The comet goldfish is becoming more common than the common with its extended tail and sleek portions; it races through the water like shooting star; how it got its name. The comet is considered as a common type, but the first goldfish to hold this title with its name is the common goldfish as shown below

Contrary to popular belief, the fancy goldfish can be kept with the common goldfish. Although the common fish are faster, the fancy fish are just as determined when it comes to meal time. The faster fish may spend most of its time racing around in excitement, while the fancy waits patiently at the bottom for the food to fall. If you’re feeding appropriate amounts and often enough; all of your fish will get more than enough to eat

Fancy goldfish have been bred to enhance what may be considered as an abnormality or weakness in the genes, such as bulging eyes like the fish in the photo above or a fat round body or a low flowing tail. In the wild, these fish would not be very successful

Fancy fish with wens require a little extra attention as they mature. The wen may need trimming because it grows along with the fish; sometimes getting so large the added weight is difficult for the fish to support. Some of these fish with wens; Lionheads and Orandas may have their vision obstructed

Although some of the fancier goldfish need special care and a special environment because of their delicate fins or body shapes, such as pearlscales, the moors, veiltails or bubble eye, most of the other fancy goldfish do very well in tanks or ponds. The butterfly moor seen in the photo below is one of the most delicate of the fancy types 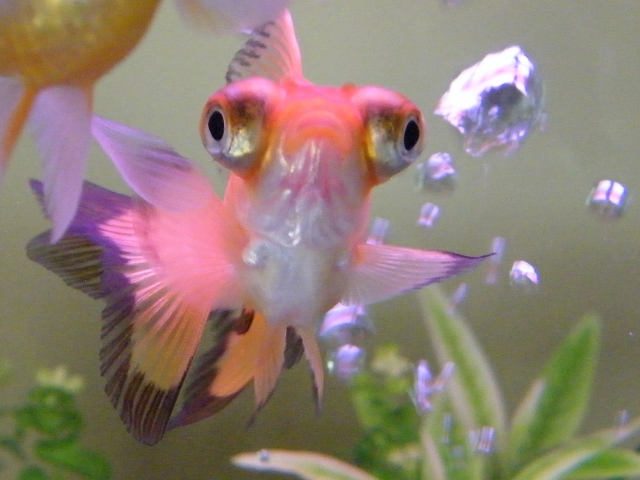