Goldfish Behavior can tell us a lot about our fish

Throughout the day you’ll see them pecking at gravel and stirring up the dust in search of an overlooked morsel. Goldfish are bottom feeders; constant grazers much like livestock, always on the hunt for a juicy bite to nibble. Much of their time is consumed by this activity. At feeding time, they become very competitive, pushing and shoving each other out of the way. If you have several fish in a tank you might consider it more of a feeding frenzy. You may notice that goldfish will grab a bite and head for the bottom of the tank before darting back to the surface for a second bite. In the wild, predators may be lurking at the surface; this behavior is a lifesaving instinct

In rare circumstances goldfish have been known to lose an eyeball or a scale during this event, mainly from two fish making a play for the same bite. When feeding large schools, and even small ones; hold food well below the surface, moisten and release, but spread the food across a large area. The longer it takes for your fish to eat, the better. They’ll greatly enjoy finding a leftover tidbit a little later on. A goldfish will gorge itself, so make sure not to overfeed a meal. Feed more often in smaller amounts

Goldfish are fresh water fish. They prefer cooler and heavily oxygenated water. Even though there are several varieties of fish that prefer the same conditions, it’s best to keep goldfish separate from other types of fish. Although goldfish aren’t aggressive by nature, instinct drives them to eat anything they can fit into their mouths, or try, including smaller goldfish, so keep the small fish separate from the large ones. Goldfish continue to grow throughout their lifespan, unlike most fish kept in aquariums

The personality of a goldfish varies from fish to fish; some are less timid than others, and some very outgoing, some will spend a great deal of their time chasing the others away from food, actually getting less food in the process. True with any critter, they quickly become accustom to routine, preferring it. They can recognize faces, and might become bashful around strangers. Some goldfish will not come to dinner if it is not served by a familiar face

If a goldfish does not come to dinner, there is a reason; its routine may have been disturbed or the water quality is poor. Feeding is an excellent time to look your goldfish over for any irregularities, such as torn fins, fungus, parasites, missing scales, discoloration or black patches on its body, or odd behavior

Goldfish are typically non aggressive creatures to humans and to each other. If a goldfish is nipping at another goldfish; it may be bored; it may not have enough space and feel irritable, or the fish getting picked on may be sick. It’s a rare occurrence when this happens though and usually there is a reason for this extreme behavior. Some fish are attracted to rotting fins, caused by bad bacteria, and the goldfish keeper mistakenly assumes the fish is aggressive, and causing the damage

Goldfish do rest periodically throughout the day and for a good part of the night. They have no eyelids, and cannot close their eyes. When they sleep, their bodies tilt a few degrees with their heads pointed down, hovering in place quietly with little fin activity, an inch or so to the bottom of the tank floor. It is very important for their general health to receive a lights out quiet time at night, just as they might experience in a natural environment. Goldfish are diurnal, meaning they are active during the day

A healthy goldfish spends little time or no time at the surface. If a goldfish is observed at the surface floating or gasping, this is an indication of little or no oxygen in the water. This behavior of gasping at the surface is often mistaken for ?begging for food? This same goldfish might actually spend a few moments eating, looking quite normal; only to return to the surface a short time later, gasping. A new fish keeper might be very tempted to overfeed

Goldfish have no core body temperature, so it’s important to make sure their water doesn’t get too warm or drop to the freezing point. Their comfort zone is 65 to 75 degrees Fahrenheit. When a goldfish gets too warm, they raise their scales to cool their bodies; referred to as pine coning. Raised scales can be caused by fever also

Goldfish become less active in colder temperatures, and become dormant as the temperature drops. They become more active in warmer water, which encourages spawning or breeding in a mixed gender tank or pond. When spawning, the males chase the females for sometimes hours at a time, creating quite a splash here and there, and the chase goes on until the female tires. This is a common method used by the pros to determine the sex of the goldfish. The male then rubs against her to release the eggs, which he will then fertilize. Goldfish seldom eat during this time period, but even so, never withhold food. When you feed your goldfish, you’re also feeding your friendly bugs

Spawning might continue for a few hours or a few days according to your stocking levels. Several males may participate as a group activity during spawning, and there is no competing over females. If your gender scale is out of balance, a female might be injured from having too many males to deal with. This event is often mistaken for aggressive behavior by inexperienced fish keepers. The male chases and then pushes around on the female

Goldfish have absolutely no maternal instinct. Once the eggs are released and fertilized their job is done, and if the eggs are not removed they will be eaten, as well as any fry or babies fortunate enough to hatch

Many people believe that their goldfish play with each other and they may very well. They can become very attached to other goldfish and even pine over the loss of a loved one. A very social fish, goldfish are much happier in large schools, and feel much safer in larger groups, experiencing less stress

Being a prey fish, goldfish may become stressed when its environment changes, such as a new tank or pond; adding a new decoration or a new plant; even a new fish. It might become stressed over loud noises, and countless other reasons. When goldfish are stressed, they might bottom sit or hide in their safe place, which should be provided if not for this very reason. Just like humans, the life of a fish can be shortened by stress 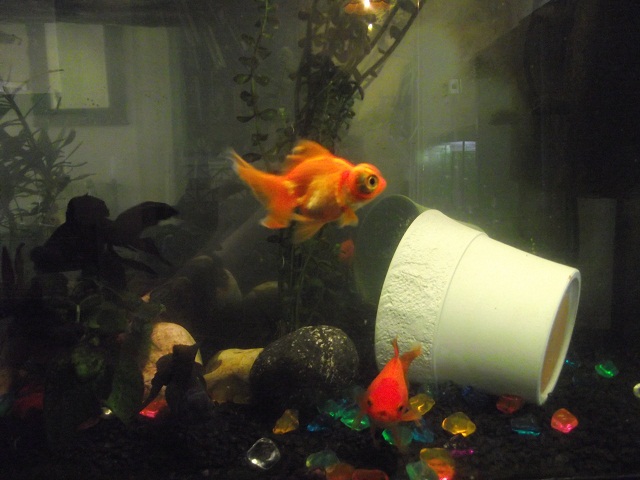 For the Love of Goldfish

Goldfish have feelings just like other animals. They show emotion, and respond to injury or sickness by hiding, bottom sitting, gasping at the surface, or darting. If your remove a goldfish from it’s tank or pond water; it flails helplessly, and in a state of panic. If the fish felt nothing, it would just lie there unaffected. When nitrate levels rise, goldfish tend to go towards the bottom of the tank or pond, this increases the water pressure, which relieves the pressure nitrates cause. In other words, the fish feels less discomfort closer to the bottom, so it remains there until the nitrate levels are lowered

Pain is mother nature’s way of telling us something is wrong with our bodies; necessary for survival, and since all animals share in having feelings or emotion, there’s no reason to believe goldfish don’t. It’s a myth that goldfish don’t have memories, or feel no pain, or it may be wishful thinking. Goldfish experience fear, anxiety, depression and joy, and perhaps a realm of other emotions too