Breeding Goldfish and Koi isn’t just for the big boys

Breeding goldfish and Koi isn’t easy. Whether or not you have the desire to raise goldfish or not, if you have a mixed gender tank or pond, they are going to breed. When goldfish are breeding they put on quite a show; this is what we call spawning. The males chase the females for hours, shoving them around and rubbing against them; creating quite a splash. This behavior is normal, although it often looks abusive, and since the female’s eggs often do not release on their own, it’s quite necessary. Many male goldfish have been isolated because spawning was mistaken for aggressive behavior

Spawning is encouraged after the rise of the water temperature which most commonly takes place in spring, with water temperatures climbing to 65 degrees Fahrenheit and above. A rise in temperature of three or four degrees must occur. When the temperatures do rise, the females develop eggs. When the eggs are fully developed, she emits a hormone that attracts the males, and the chase begins

Once the female tires; she may appear as though she’s in distress; gasping; drifting aimlessly, but will soon make a full recovery. The chase will continue until the female releases the eggs. The male will fertilize them as they are being expelled as the grand finale

After the eggs are released they float delicately in the current, and eventually adhere to plants and decorations in the tank or pond. If they are not removed, will soon become a welcome and nutritious treat for the goldfish. Any eggs that are fortunate enough to hatch, will produce fry (baby) goldfish. These fry are also at risk if not removed from the larger fish

Quite often you will see one or two goldfish in tank, although, this is a recipe for disaster if these fish are female. Maturing at 3 to 4 years of age, female goldfish produce eggs with or without the availability of males. Young healthy females may release the eggs with or without a male, but sadly many females will become impacted. In most cases, the eggs will be reabsorbed into the body if more eggs aren’t being produced in the meantime, binding her up even more. This may lead to floating disorders, extended or swollen abdomen and even worse; infection. In a small body of water like an aquarium, the temperature fluctuations may be often

Don’t be surprised if you wake up to tiny fish in your aquarium or pond some day. This happened to one of our members. Read Story of Babies

If you smell fresh fish, this indicates the are spawning or have recently spawned. The smell will vanish soon after the fact. Could we be smelling caviar?

Only mature females produce eggs and only mature males are capable of fertilizing them, although, young goldfish ‘play’ spawn even though they are not old enough for breeding; this is a natural instinct. Some females slow or stop emitting hormone as early as 7 or 8 years of age, however most go through menopause at 10 to 12 years

The age of spawning may depend on the general health of the fish and the environment, however, complications set in after menopause. Reduction of hormone leads to impacted eggs which lead to floating issues. Unfortunately, a lot of female goldfish will die prematurely due to female issues

If you look at the photo below closely, you’ll see the eye of the unborn fry in the egg

Learn the difference between goldfish and Koi 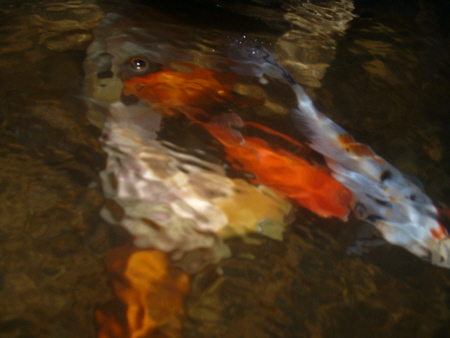 Older males will join in less and less in spawning activities as they age; eventually losing all interest. Much like humans, fewer hormones are produced in younger and older fish

While fish are spawning, make certain that your tank or aquarium is covered with a screen or temporarily reduce the water table. Goldfish or Koi become very active while mating and have been known to jump out of their water, sometimes with unfortunate consequences

Goldfish sometimes lose a scale or two, and may have a scrape of a bruise after a rough breeding session. Periodically treat your fish to the ‘Salt Tonic’ to reduce the risk of infection. Make sure your aquarium or pond is free of sharp edges that can cut or scrap fish

If you have the desire to breed goldfish, the water quality of your main tank will have to be pristine. The goldfish tank or aquarium should be of an adequate size. Goldfish will start spawning after the water has cooled and begins warming again; typically between 68 to 78 degrees Fahrenheit

How to breed goldfish

Although young fish will play spawn; only mature fish can actually produce or fertilize eggs. Fish are considered mature at three to four years of age

You may notice a fishy smell coming from your tank or pond during spawning. The odor will subside soon after the event

The breeding pair should be removed from the tank (if they were with other fish) and put into a breeding tank…it has a compartment at the bottom for the eggs to fall into; safe from harm’s way. Free floating plants can be placed in the tank, and the plants removed as the eggs collect on them also. These plants can then be removed from the main tank and placed in a container with no other goldfish

Goldfish eggs are about the size of a small pearl, a translucent white, and if the egg is fertile, you’ll see a dark spot in its center

How do goldfish breed?

Fill it two to three inches deep. Point a fan so that it skims across the surface, disturbing it

Daily water changes should be performed using water treatment to keep water safe. Be sure to work fresh water over to remove supersaturated gases

The temperature should be maintained at 74f, so a tank warmer is necessary. The eggs only take a few days to hatch out. As the fry mature the temps may be lowered gradually from the middle to the higher side of the comfort zone; 72f to 74f

Fry food is available at some shops, although, is usually special order. Hard-boiled egg yolk made into a paste with tank water and fed with a dropper is a good emergency food for fry. Fry can’t get their mouths around normal fish food & require a special type of baby fish food