Fish out of Water

Fish Out of Water can survive 36 hours without oxygen

Fish out of water; ever heard the expression? Even though it is uncommon, it’s every fish keeper’s worst nightmare; goldfish and Koi both have been known to jump out of their aquariums and ponds, quite often leaping to their death.  There are a few explanations for this suicidal behavior

Why do goldfish jump out of their tanks?

Goldfish and Koi become less active in colder water temperatures. They don’t hibernate, but close to it, they become dormant. In warmer temperatures their activity is greatly increased. In a mixed gender school they spawn. Goldfish and Koi both are vigorous breeders. The males chase the females with the greatest of enthusiasm. In all of the excitement, a goldfish could unintentionally leap out of the water, falling prey to predators or suffocation

Goldfish or Koi infected with parasites often swim sporadically; flashing against objects. In their desperation to escape the intense itching, they might be tempted to leap out of the tank, intentionally or unintentionally

Maybe a little far fetched, but possible; a single goldfish, the lonely guy, may jump from an aquarium in an effort to get to the fish it sees in the reflection of a glass tank. Our fish swim in schools and feel much more confident with other fish

A fish out of water may have been displaced by a predator. Just because they make the catch doesn’t mean they’ll make off with it. At that very moment, when they drag the fish to dry land, they become prey. Instinct tells them they’re not the only hungry critter in the wild. A disturbance of any kind will cause them to drop the kill and run. They may be back later to check things out; when it’s safe

How to keep goldfish from jumping out of tank?

Make certain that the water level in your aquarium or pond is low enough to prevent any of these accidents from occurring. To keep your fish safe, the length of your longest fish should match the space in between the surface and the top of your fish house. If you have a pond, a 12″ gap should be sufficient for goldfish, but add a few inches if you keep Koi. Most aquariums come equipped with lids, but goldfish fare much better in open topped tanks with water surface exposed to greater amounts of fresh air. If you feel more comfortable with a top, consider a screen instead

What to do if goldfish jumps out of tank

In the event your goldfish jumps out of its water, return it home ASAP, even if you believe the fish has already expired. Gently guide the fish through the water in cupped hands. If after five minutes, the fish still isn’t breathing, try the following procedure

If you need time to gather the ingredients listed below, place the fish in an appropriately sized container with water from its tank or pond. If your fish is a large Koi, maybe you have a tote, a tub or even an ice chest large enough and strong enough to support it and its pond water. If all else fails, soak a towel in pond water, and cover the entire fish with it

Pour the solution in the container the fish is in; all around slowly mixing with your hand as you do so
Fill the syringe with the solution
Force the syringe tip into the fish’s mouth, pointing the the tip at first one gill then another, squeeze steadily; repeat this action several times flushing the gills with the solution

If your fish is wrapped in a towel, place it back in the pond to administer solution

If after five minutes of treatment time there’s no response, wait a while, and try again, and then again. Give it time, and you may be surprised 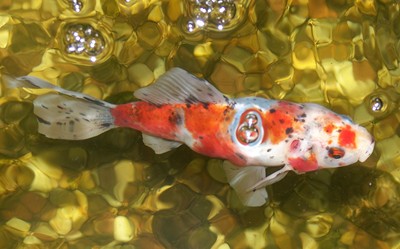