Salting our fish, should we or shouldn’t we?

Salting our Fish; miracle that it is, salt is one of the most abused substances in the fish industry. Salting our fish destroys bad bacteria and parasites, so many goldfish keepers rely on it for a healthy environment, instead of Mother Nature. If used properly, salt is extremely beneficial. Where salt is concerned; less is more. Most goldfish and Koi food contains trace levels of salt, as well as the water they live in, so it is natural for our fish to have these same amounts in their blood stream. The levels of salt in their bloodstream match the levels in their tank or pond water

Salt contains sodium chloride which improves gill function, allowing the fish to absorb a greater amount of oxygen into the blood stream, but only if the water is oxygenated properly of course. This is why the salt bath or dip has saved many a fish from certain death

Do not use salt on bloated fish; fish with raised scales. Stagger use of salt remedies and treatments; do not combine

Have you recently medicated your goldfish tank?

Never combine salt with medications. Use salt before or after medicating. Do not use salt continuously or your fish and unwanted life forms will build an immunity to it. It will become useless as a treatment. Continued or over use could cause internal damage to the fish’s internal organs by increasing the strain on them, leading to liver or kidney failure. A goldfish or Koi exposed to concentrated levels for too long of a time period could develop extreme sensitivity to the saline, having little or no tolerance for even low levels

Salt can be used in many ways to enhance the health and vigor of your fish; by reducing stress, increasing slime coat, destroying harmful bacteria and parasites. Goldfish or Koi on the brink of death have been revived from a salt bath or dip. Although salt has great value to the fish keeper, it also can be lethal to fish, so use it cautiously. Never add salt directly to fish house water. Always premix with fresh water source  Dissolving Salt

There are many varieties of salt, but some of these contain anti-caking agents and iodine which may be harmful to your fish with long term use. For an emergency most any of these varieties will work. Use a pure form such as sea salt, kosher salt, aquarium salt or pure Morton’s rock salt otherwise. Natural sea salt containing no additives is my favorite salt because it contains a higher content and variety of trace minerals that our goldfish and Koi will benefit from use

Salt is a mineral composed primarily of sodium chloride and is essential for animal life form, but can be toxic to vegetation or animals in large quantities

The unique composition of minerals contain chloride and sodium ions, the two major components of salt; necessary for the survival of all known living creatures, including humans. Salt is involved in regulating the water content of the body

Salt used as a tonic or given as a bath restores vitality by restoring slime coat and repairing damage done by lack of oxygen, chlorine, chloramines, ammonia, or growth hormone poisoning: If used properly, salt can kill a number of parasites, viruses, and bacteria infections which occasionally affect fish

Carbonate minerals give water the ability to support oxygen, and low levels lead to a low pH. Although this mineral contains salt, as long as levels are in the comfort zone the amount of saline will be healthy for goldfish and Koi

Sodium bicarbonate or sodium hydrogen carbonate is a component of the mineral natron and is found dissolved in many mineral springs. The natural mineral form is known as nahcolite

Some of the treatments found on this site include Epsom salts which relieves fluid retention, but this is just one of its many qualities. Goldfish greatly benefit from its periodical use and require magnesium in their water for good health 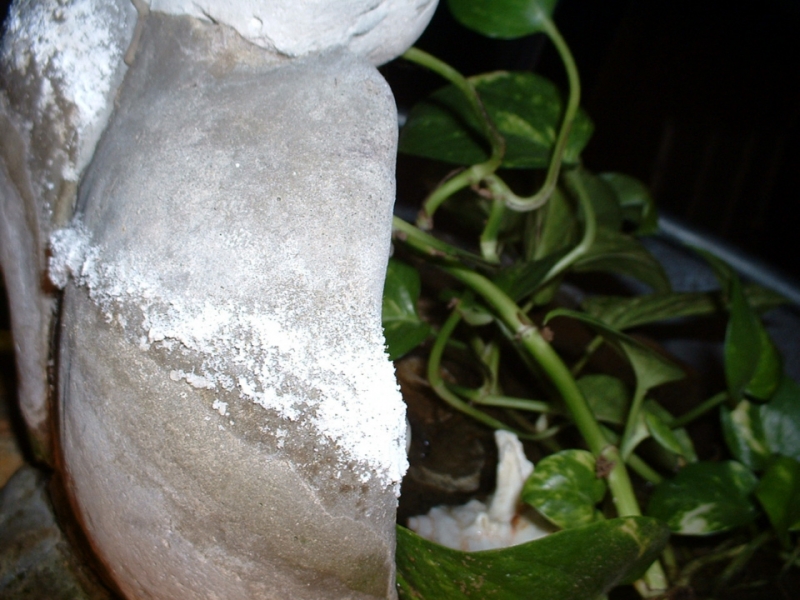 Salts are a powerful force against infection; and used as a preventative will benefit goldfish health, however, bad bacteria quickly build resistance to the substance. Some experts recommend keeping a constant saline solution in your aquarium or pond, but the fish will suffer, not the bad bacteria. Being freshwater fish, too much salt stresses the organs, and can even poison fish. Fish that are over-salted today will suffer from organ failure tomorrow

Use half the amount called for on boxes of aquarium salt sold at pet shops. The high does have poisoned many a freshwater fish

If your fish are in water that is low in carbonate mineral value, use Water Boost which gently lifts carbonate, magnesium and oxygen values to make for a healthy pH

If your fish have been infected by parasites or bad bacteria, has a poor slime coat, poor gill function or has experienced oxygen deprivation, use this bath and treatment Sea Salt Remedy