Why Goldfish Die. For every one of the 10 causes of death listed below, there are perhaps another 10 causes or more, however, we may not know or understand them, and even if we did, we may not be able to do anything about them. Below you’ll find listed the most common causes of death that can easily be avoided by learning and following the 10 Steps to Goldfish Keeping

If you’ve ever wondered why the healthy goldfish you bring home in a plastic bag dies within a few months after purchase, here’s just a few of the reasons why goldfish die

Why did my goldfish die

Ammonia poisoning Ammonia is a toxin created from waste that fish produce. This is the first toxin to be converted in the nitrogen cycle. Symptoms are clamped fins, white marks caused by burns that turn dark as they are healing and lack of activity (goldfish have zero tolerance to ammonia)

Nitrite poisoning Nitrite is a toxin created by friendly bugs that consume ammonia and convert it to nitrates. Think of nitrite as friendly bug pooh. Symptoms are broken blood vessels, red veining in the tail fin, red blotches  on body (goldfish have zero tolerance to nitrite)

Oxygen deprivation Causes can be associated with low pH, low KH, supersaturated gases, enclosed tank and or lack of or improper water movement. Symptoms are redness around the gills, overworking gills and mouth, spending time closer to the top of the tank or pond rather than the bottom, gasping at the surface

Nitrate poisoning Nitrates are created by friendly bugs that consume nitrite and convert it to nitrates. Think of nitrates as friendly bug pooh. Symptoms are bottom sitting, lack of appetite and bent position. Nitrates must be reduced gradually (tolerated in low levels 10 to 20 ppm)

Constipation Caused by feeding too much food at one time which encourages the fish to gorge which may lead to an impacted tract. Symptoms are creating little to no waste, long stringy pooh and or floating issues

High water temperature Caused by enclosed tank, improper lighting and or room temperatures that are too warm. Symptoms are raised scales, lack of activity and loss of appetite. Comfort zone is 64f to 74f

Shock Caused by sudden change in nitrates, pH or water temperature caused by performing too large of a water change too quickly or exchanging 100% of the tank or pond water. Symptoms are bottom sitting and lack of appetite

Chemical poisoning Caused by, chlorine or chloramines in tap water, air pollutants, overuse of water treatment and commercial products and or hand contamination. Symptoms are swelling or bloating 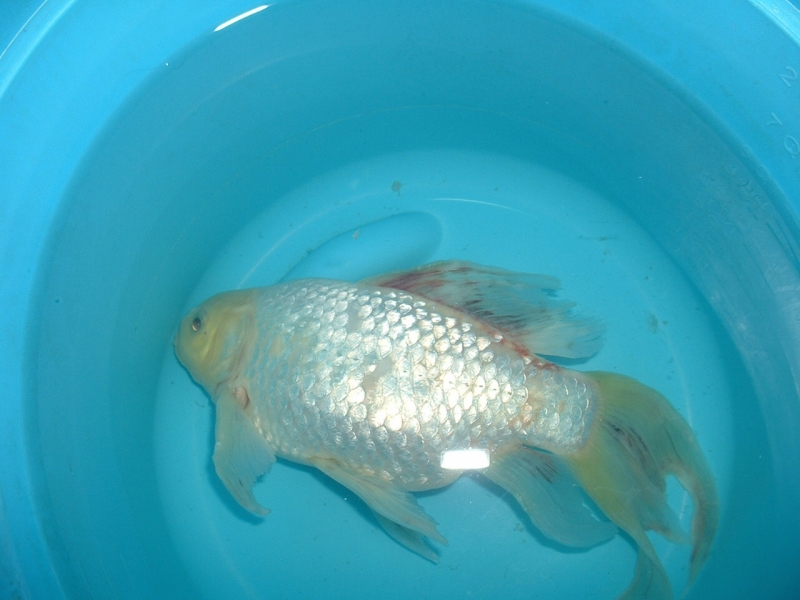 Not on the list, the goldfish in the photo above died from occasional blasts created by a scrap metal company located a few blocks away. Although the blasting created little upset to the home owner, the powerful vibrations were too much for the fish. The lateral line, located just below the dorsal fin is the organ thought to transmit sound, and is sensitive to vibration. One blast too many, or one too powerful damaged the organ, causing the fish’s death. Place your fish house on a pad or styrofoam to reduce vibrations. Your home may not be located close to a scrap metal company, however, thunder can produce the same outcome

10 Steps to Goldfish and Koi Keeping

Death of a Goldfish