Goldfish bottom sitting and will not eat

Goldfish bottom sitting is a symptom shared by a few various conditions, such as pressure caused by nitrates or super saturated gases. Another less common symptom, sometimes referred to as a sinking issue, is the absence of waste in the tract

Fish suffering from a true sinking disorder are unable to lift or swim; therefore, they are also unable to tilt their head towards the floor where food can be found. Goldfish with this disorder must be hand fed, or they will literally starve. Carbon dioxide is a gas created from waste which is utilized by the swim bladder. This organ gives fish the ability to rise or sink at will. When there’s no food in the tract, there’s no gas available

Using pressure of deep water to equalize pressure caused by the toxin, fish poisoned by nitrates sit or lay flat on the bottom

Nitrate poisoning is a common occurrence in goldfish houses because the keeper is unaware of the nitrogen cycle. The first symptoms to appear are bottom sitting. The fish begins to curl or bend as toxin levels rise in the water and their bloodstream if conditions aren’t improved. High levels of nitrates combined with water low in oxygen is a deadly combination due to the fact, nitrates rob the blood of oxygen

Once a fish is poisoned by nitrates it may be super sensitive in the future, preferring low levels

Causing similar symptoms are SSG; super saturated gases, often referred to as increased amounts of oxygen. These gases are created by pressure in tap water. The minuscule bubbles fill a body of water keeping oxygen from entering, and are soon absorbed into the fish’s bloodstream. The not so innocent, tiny bubbles often cluster beneath the skin looking much like a tumor, however, super SSG may be removed from water by working it over or adding a pond pump to a freshwater bucket

Eliminate super saturated gases from freshwater by exchanging small amounts of aquarium water more frequently. Another method of reducing SSG, it to fill freshwater buckets with slow running water from the tap to reduce pressure. Work freshwater over by pouring, but let it hit hard. Test for SSG by filling a clear glass with freshwater, and then let it sit a half hour. Do you see tiny bubbles forming on the sides of the glass? If so, keep pouring 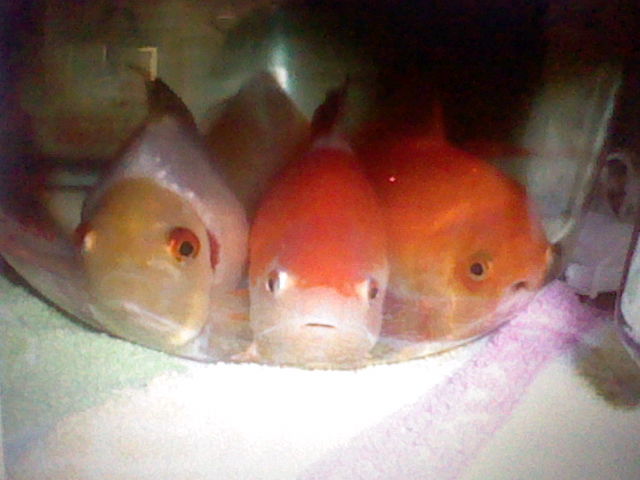 Perform the water change below, following each step closely

Back to Symptoms and ailments