Goldfish raised scales caused by too warm of water or fever

Goldfish raised scales its body is overheated. Goldfish are cold blooded, and can literally cook in too warm of water. The comfort zone is 64f to 74f. All fish with scales show the same pine cone symptom in an effort to cool their body temperature. Raised temperatures are caused by either too warm of water or fever caused by infection or disease

If you are certain the water has been cool enough for your fish, the same symptoms could indicate the fish has a fever. Just like people, if a goldfish raised scales, it may be infected, and when this happens, their temperatures rise with fever to blame

A happy goldfish is a cold fish

Having no core body temperature, goldfish must be kept in temperatures that are no higher than room temperature. Many people make the mistake of keeping their indoor aquariums in front of a window in direct sunlight or over a heat register. Some people keep their tanks in the kitchen where temps rise when dinner is being cooked

Goldfish in ponds can easily tolerate the warm summer days if the bottom of the pond is at the freeze line. This is the point of depth in the earth that doesn’t freeze in the coldest part of winter, but it also the point where it remains coolest. The earth is a great insulator, and ponds lying above the ground in warm weather regions are dangerous for goldfish and Koi alike 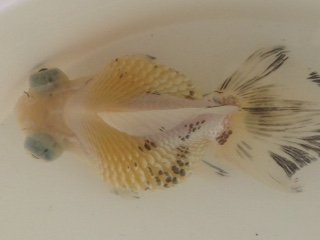 If your goldfish is exhibiting the symptom of pine coning, chill the water by scooping aquarium water up in a pitcher; chill it in the freezer or fridge, pour in slowly and all around; refill and repeat until temperatures are well below the low end of the comfort zone. Reduce temps to 55f until scales have returned to their normal position

Back to symptoms and ailments