Seven years ago now, I brought home my Oranda Goldfish.

After finally convincing my parents that I was responsible enough to have a pet fish, my dad and I made our way to Pets at Home, where we purchased all the necessary equipment and proceeded to pick out a fish. Before we could take a fish home- an employee asked us a few questions: how long we’d had the tank set up for, whether it had a filter, and whether we knew about de-chlorination…etc. To my disappointment we were told that we couldn’t take a fish home yet as we were told that the tank has to be set up for at least 3 days before fish can be introduced. I thought 3 days was a long time but If you understand the ins and outs of cycling, you will know that it takes at least a month for the right amount of good bacteria (in relation to how much waste is produced in the aquarium) to colonize the filter media. We were also recommended a product which claims to kick start the cycle. This is the product description from the Pets at Home website: Fluval Biological Enhancer is a responsive biological aquarium supplement that immediately inoculates aquarium water with a powerful team of beneficial bacteria, providing a safe biological habitat for your fish.

This is why I believe this product and products like these, are useless:

One of the most fundamental things about cycling is: there needs to be a source of ammonia for the bacteria to feed on in the first place! You can’t just plop some good bacteria (that most likely aren’t even alive as I simply do not think they have access to oxygen or food in their bottle!) into some water and expect them to just live off of nothing.

Another important thing you should know is: the amount of bacteria matches to the amount of waste produced by the animal(s) in the tank. You can’t cycle your tank for 1 fish and then add more straight away because there will only be enough bacteria to process waste for 1 fish.

The fact that pet stores don’t tell you any of this, just highlights how insidious and malign the pet fish industry can be. They spread false information in order to increase their profits. If companies told people, how to  take care of fish properly, more fish would live out their full lifespans, and as a result less customers would have to come back in order to replace their deceased fish at a less frequent rate – but of course, where’s the profit in that?!

So, because of this plethora of misinformation, that screws aspiring fish keepers over, for the first 5 years of my fish’s life, the water quality in his tank was BAD, to say the least. Despite this, my sad fish stayed strong and resisted developing health problems until around 2 years ago (other than the cauliflower like growths on his pectoral fins which I believed to be nothing, but as they got bigger and more noticeable- I searched the internet and concluded that it may have been lymphocystis).

Moving on- as I said, the real issues started 2 years ago. His wen grew VERY big, so big that he could no longer see or lift himself off the floor of the tank. At one point, I believed the abnormally fast growth could be the result of a bacterial infection, in the wen, so I mistakenly treated the tank with shop bought antibiotics (another “great” product from Pets At Home). Now, antibiotics aren’t effective when it comes to treating fish (very little  specific research and testing has been carried out on the effects of antibiotics on fish – this was confirmed to me by the vet who operated on my fish ). Everyday seems to produce more and more evidence supporting the fact that absolutely all living things depend on bacteria for survival – good bacteria are VITAL for the body to function properly. We all contain kilos and kilos of ‘symbiotic’ bacteria that are proving to be increasingly crucial to our well being . Good bacteria reside not only in the filter media, but inside the fish and on the surface of its body. As soon as you introduce antibiotics into the tank water, not only do the evil bacteria get eliminated, but also the beneficial bacteria. The issue with this is – in comparison to bad bacteria, it takes a long time for good bacteria to form… So, when you stop using the treatment there will be no good bacteria to destroy the bad and the bad bacteria can take over in a matter of hours.

Anyway- within a period of time, goldfish developed a tumour under one of his eyes. Tumours in fish are usually non-cancerous, which means they will not directly kill the fish but cause problems when they grow too large. These benign tumours can be caused by numerous reasons

I made the decision to go to a veterinary surgeon in the hope of getting both the tumour and some of the wen removed. The operation was very pricey but successful, however, unfortunately, both the wen the tumour grew back very quickly.

Around 2 months later my worst fears came into being, sadly, goldfish developed a swollen abdomen and raised scales. I concluded it was Dropsy (organ failure). These 2 symptoms usually signify that the end of the fish’s life is near.

After scouring the internet for solutions and joining various fish forums (no one on these forums could give me a straight or definitive answer), there were a lot of dead ends. Nothing seemed to fit together or make sense. At this point I would like to say how the majority of info about how to keep fish on the internet is false – just because it is ‘in print’ online does not mean it is correct (something to keep in mind in general these days)  In short, I was at a loss; until I found Brenda. This was a major turning point for me knowledge wise! She had a detailed answer to basically every question that I had been asking. Something the people on the fish forums just couldn’t do… I was so happy everything finally made sense, but sadly I believe it was already too late for my poor goldfish, who was already in very bad shape. But, I believe, if it weren’t for Brenda’s advice and her natural remedies, he wouldn’t have survived for as long as he did (he survived a little over 3 months after the bloating began). 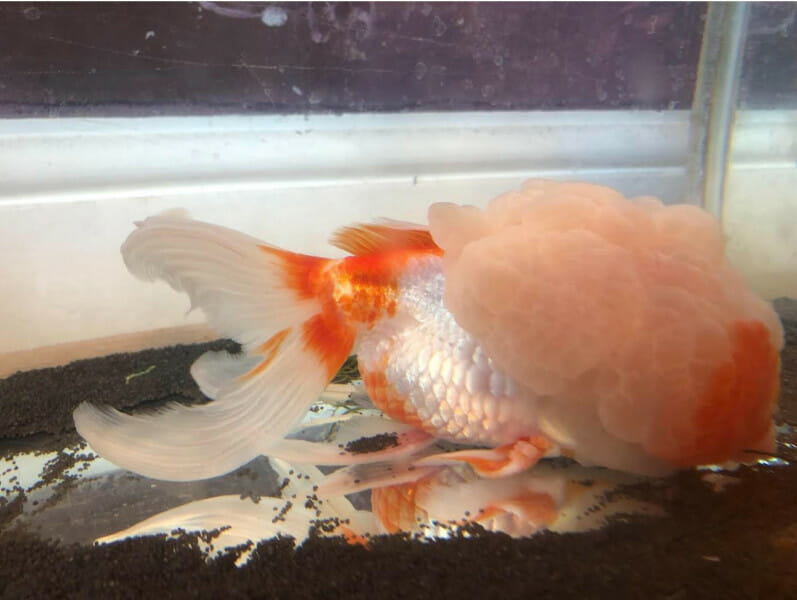 Before you use the natural remedies you must understand that these remedies only help if the water quality in your tank is perfect. Before you use the natural remedies you must be sure that the water conditions in your tank are perfect for your fish by testing the water with a testing kit. The most important parameters you should monitor are ammonia, nitrate, nitrite, pH and KH (detailed info on this topic is included in the 10 steps). Practically all cases of ill health (in fish) are caused by poor water quality.

No medication natural or chemical can save your fish if the water quality isn’t adequate. It is a bit like a person living in a room with no ventilation with nowhere to go to the toilet other than the floor. You’re gonna get sick. 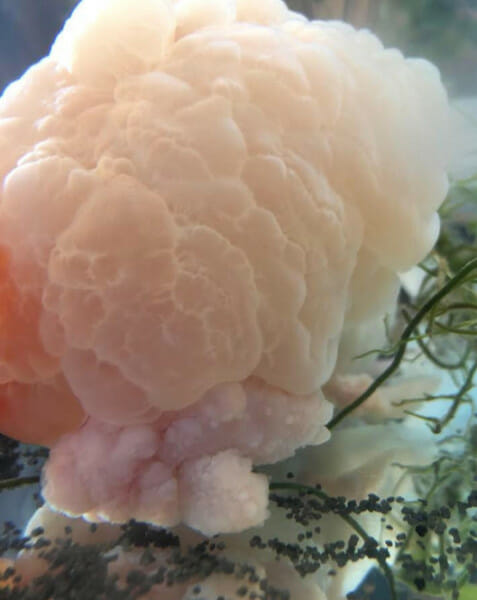 Brenda taught me a lot, but these were some of the most shocking things, she opened my eyes to, that have stuck with me: how antibiotics do more harm than good, how most pet store chemicals, meant for fish, are detrimental to their long term health, for example – overdosing on dechlorinator, over a long period of time can result in organ failure.

*BTW everything you need to know about keeping goldfish is on this website so go start with the 10 steps to goldfish keeping. If you follow these steps your goldfish will thrive.*

Sinse de-chlorinators have harmful effects if used long term, Brenda offers a safe, natural alternative If you don’t have chloramines in your tap water you can use Oop boost instead of dechlorinator.

For treating dropsy instead of antibiotics, I used her Organic Goldfish remedies. These were the ones I used: the dandy remedy (helps bloating and detoxifies blood), the garlic remedy (garlic is naturally antibacterial, antifungal and anti-parasitic) and Oop boost (oxygenates and dechlorinates water) as I said I believe her remedies helped a lot but due to the size of his wen combined with the tumour which grew to four times its original size after surgery and his possible organ failure, it all, combined, to put too much strain on his body.

Another important thing I should mention: fancy fish breeds are already physiologically compromised due to selective breeding – that is primarily driven by artificial value judgements of what ‘looks pleasing to the human eye’ regardless of whether such a physiology is actually beneficial for the fish in terms of its survival and quality of life.  Selective breeding causes a myriad of health problems, and, as a result, individual fish suffer. Don’t support this cruelty, or if you’re set on getting a fancy, then at least do your research on the ethical standpoint of the organization from which you are buying the fish. (Some organizations give goldfish growth hormone to make their wens’ grow large).

So, in conclusion, don’t make the same mistakes I did. Do your research properly- Do not get a single fish until your tank is cycled. Keep use of chemicals to a minimum and never use antibiotics.

About the Author: Katya