Created from pressure, supersaturated gases are found in most tap water. These concentrated amounts of oxygen, SSG can be deadly to goldfish in large amounts. The minuscule bubbles are capable of filling an entire body of water, keeping oxygen from entering. These tiny bubbles that often go unnoticed can be absorbed into a fish’s bloodstream, where they can literally implode, causing extreme pressure to the body. Symptoms may be similar to nitrate poisoning. The fish may become pressed to the floor or even curled. The cure is the same; deep water that is heavily oxygenated, free of supersaturated gases; the weight of the water relieving the pressure caused by SSG

External or Internal, supersaturated gases dissipate within a few days or several, depending on the quantity and water movement

To keep your goldfish safe from these harmful gases, work freshwater over to eliminate by running water first in a pitcher. Hold it high over a tub or bucket, and pour, letting it hit hard

SSG can also collect in pockets under the tissue, looking much like a tumor or mass, forming on the upper side of the body from front to back

Run tap water at a low force, and if possible, remove the screen found inside of the cap of the faucet. This won’t remove all of the gases, but will greatly reduce the volume

Test freshwater for SSG by scooping water up in a clear glass. Let it sit for a half hour to an hour. Do you see bubbles on the sides of the glass? If not, the water is free of gases

If your tap water contains abnormally high levels or stubborn SSG, it may be beneficial to
place a pond pump in your freshwater tub to eliminate them, before adding the freshwater to
your tank or pond

It’s okay to borrow a pond pump from your goldfish house if the freshwater is treated for
chlorine beforehand. It normally takes an hour to clear the gases in five gallons of water. The supersaturated gases will not disturb the beneficial bacteria in the pond pump

If you look closely, you’ll see tiny bubbles clinging to the side of the glass in the photo below; these are SSG, supersaturated gases 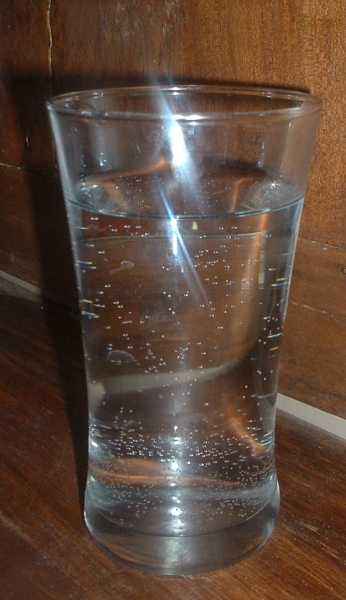 Other methods of eliminating these gases is to use an electric hand blender, egg beater or even a whisk will break up the tiny bubbles. Vigorously shaking a container of tap water will also get the job done

10 Steps to Goldfish and Koi Care