Goldfish sucked on by Pleco. Please help her recover!!

I know, I know it was a horrible idea to have a Pleco and a Goldfish together. After listening to a Pet store clerk 2 years ago we brought ‘Zucchini’ home and tried to make it work when we realized the mistake, since we only had time for 1 tank. 6 months ago our male Goldfish got sick. ‘Zucchini’ sucked on our now deceased male goldfish and got a taste for goldfish slime coat, I guess. We thought if we fed him well he would leave the healthy female alone, they had been living peacefully for 2 years together. But ‘Fortune’ our female Goldfish was aggressively attacked one day when I forgot to put some vegetables on the veggie clip.

We managed to rehome Zucchini, which was a sad goodbye. Leaving us caring for the injured Fortune. She is the only inhabitant now to a 50 gallon tank. It has a 40-70 gallon Aqua Clear filter, Aquatic sand, a bubble wand and silk plants. I haven’t checked water parameters because I’m dealing with an injury and it’s hard for me to use the Master kit.

Day 1- I have been feeding her only sinking pellets and peas because she can’t swim to the top of the tank. I’ve been giving her Vitachem vitamins long term and I’ve been using Kordon Fish Protector with Vitamin B12 and Echinacea since injury as well adding Hydrogen Peroxide to the tank 5Tbs.

I turned off the bubble wand because Fortune is having a really hard time swimming. I continued the Fish Protection and Vitamins according to instructions. Added a dose of Melafix. By night Fortune can’t eat peas, can’t swim. Is laying st the bottom of the tank or occasionally righting herself and floating/struggling.

What can I do? I’m afraid to do a water change in case the Prime water conditioner hurts her fragile tail. I’m afraid to do a salt bath because she is on medication. Not sure how much longer she can stay at the bottom or go without eating! 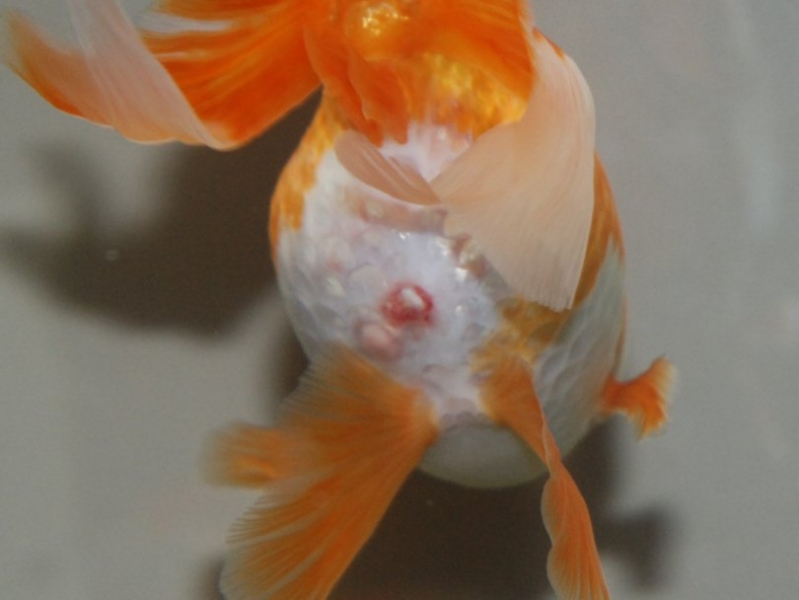 by Venus: Nitrate levels were dangerously high. A large water change was performed after the owner noticed the fish wasn’t quite right. Fish is starting to curl due to nitrate shock

Fish swimming normally. Although some damage may have occurred from Pleco sucking on fish, nothing too serious

After a few days of deep and heavily oxygenated water, fish is recovering