Goldfish blowing bubbles through mouth or gills isn’t a serious ailment, but can lead to such if the cause isn’t corrected. Goldfish are often attracted to the bubbles an air pump produces, and enjoy nibbling at the bubbles, however, this is not healthy. New goldfish keepers are led to believe that air pumps oxygenate water, although, it’s simply not true. Goldfish that nibble on these air bubbles can swallow air, which may lead to swim bladder issues, however, more than likely the air is pushed back out the gills or the mouth, which looks like the fish is blowing bubbles

Life threatening, goldfish seen at the surface gasping or blowing bubbles are being deprived of oxygen

Goldfish and Koi will spend time at the surface gasping and sucking air when oxygen levels are low. New goldfish keepers believe their fish are begging for food, however goldfish fed on the surface, beg on the surface, which can also lead to blowing bubbles

Goldfish blowing bubbles surface may be gasping at the surface in an effort to get oxygen. If oxygen is low in their water, this is where you’ll find them. This may relieve them in some way, but it doesn’t get the job done

Supersaturated gases may also lead to goldfish blowing bubbles, however, not enough information has been collected to confirm the theory. Found in pressurized tap water, theses gases are actually increased amounts of oxygen that are capable of suffocating goldfish. Readily absorbed into the fish’s bloodstream; clustering beneath the tissue, SSG can look much like a tumor. A seemingly harmless gas can also be ingested, causing fish to expel them from mouth and gills. Working fresh water over will remove these minuscule bubbles from tap water, although a pond pump will get the job done faster and more efficiently 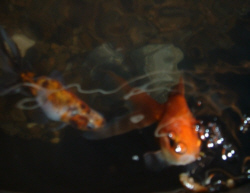 
Back to diagnose symptoms and ailments