Goldfish tumors on body may be a simple issue. You may not know it, but your tap water is filled with supersaturated gases produced by pressure in the lines. This pressure helps water travel the distance from the reservoir to our homes. These concentrated amounts of oxygen can fill a body of water suffocating fish. They are easily absorbed into the blood stream where they cluster beneath the skin, looking much like tumors. The eyes and upper side of the body is where you’ll find them

Supersaturated gases are often a problem when large water changes are a being performed. The tiny bubbles may not be noticeable as they move about freely in the water, but they make their presence known by clinging to the fish, the walls of the aquarium, plants and decorations

Goldfish and Koi affected by SSG exhibit similar symptoms as nitrate poisoning. You may see them sitting pressed to the bottom of the aquarium. You may even see them curl due to the pressure the air caused by the gases. These gases often accumulate in the eye socket, causing the eye to bulge. Although SSG isn’t the only cause of bulging eye, it’s the most common

Most goldfish keepers are unaware of SSG

Test freshwater for SSG by scooping water up in a clear glass. Let it sit for one hour. Do you see tiny bubbles forming on the glass? If so, keep pouring

The fish in the photo below has warts 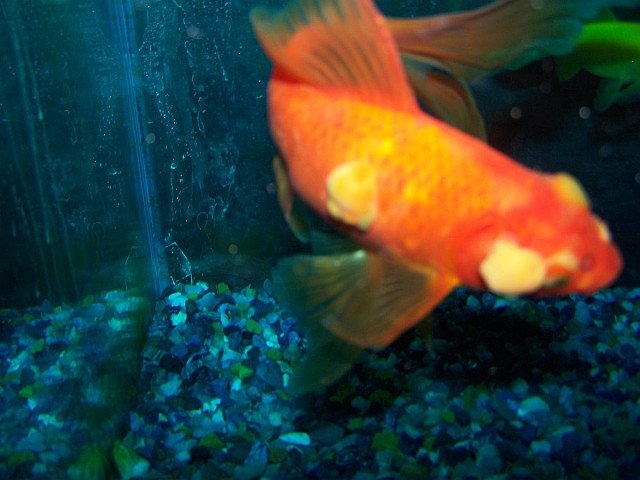 Goldfish has lump or tumor

If the lumps on your fish are firm to the touch, and have a rough texture, your fish has warts. Warts are very common with goldfish and Koi, however, they’re easy to eliminate by using Sea Salt and Garlic Remedy

Other types of lumps that may be actual masses, cancerous or noncancerous have been treated successfully using
Garlic Remedy and Aloe Remedy combined

Back to Diagnose symptoms and treat